Whitney Davis (George C. and Helen N. Pardee Professor of History and Theory of Ancient and Modern Art at UC Berkeley), is publishing Visuality and Virtuality: Images and Pictures from Prehistory to Perspective with Princeton University Press, forthcoming, November 2017 (ISBN: 9780691171944). 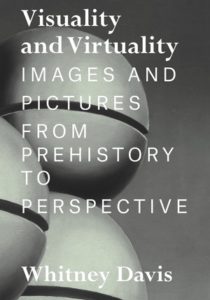 “This book builds on the groundbreaking theoretical framework established in Whitney Davis’s acclaimed previous book, A General Theory of Visual Culture, in which he shows how certain culturally constituted aspects of artifacts and pictures are visible to informed viewers. Here, Davis uses revealing archaeological and historical case studies to further develop his theory, presenting an exacting new account of the interaction that occurs when a viewer looks at a picture.

A profound new theory of the work of both makers and viewers by one of the discipline’s most esteemed and engaged thinkers, Visuality and Virtuality is essential reading for art historians, architects, archaeologists, and philosophers of art and visual theory.”