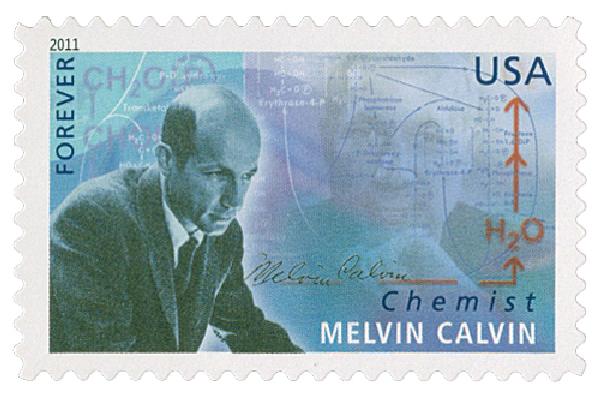 In 1926, Melvin Calvin’s high school science teacher told him, “You’ll never make a scientist because you guess too much.” At the time, Calvin was an introverted, yet inquisitive, senior at Detroit Central High School. After skipping two grades in grammar school, he was younger and smaller than his classmates. Rather than nurse young Calvin’s curiosity, his science teacher scolded, “Be quiet. You don’t know what you’re talking about, you haven’t listened to the data.” But the precocious boy never stopped asking questions, and later, the data he produced made him famous.

“I tell you,” Calvin recalled in his oral history interview, “the instructor in physics really turned me off, not on. He was one of these people, [as] I remember him, who thought of science as the gathering of data and the drawing of conclusions. And guessing didn’t play any role in the development of science.” But, as Calvin remembered it, “I was a great guesser! He would ask questions and I would guess at the answers. I was wrong half the time,” Calvin admitted, “and he simply put me down.” Thirty-five years after those put-downs, TIME magazine named Melvin Calvin ‘Mr. Photosynthesis’ for his pioneering research unveiling the way plants wrangle sunlight, water, and air to make their food and, ultimately, power the planet. In 1961, Calvin’s search for answers to his endless questions earned him a Nobel Prize in Chemistry.

Melvin Calvin’s oral history interview addressed, in great detail, aspects of his renowned scientific career, from his postdoctoral work with Michael Polanyi in England, to joining Berkeley’s College of Chemistry in 1937, through his efforts in the Manhattan Project, to his pioneering research on photosynthesis. But the power of Calvin’s oral history resides in the unexpected, unscientific, and personal stories that appear nowhere else. Oral histories with scientists like Melvin Calvin reveal the human and emotional side to scientific processes that, from the outside, might appear purely rational or apolitical. Much of Calvin’s oral history delved into the political and interpersonal aspects of his scientific career, including his Nobel-winning research on the biochemical pathways of plants. Yet Calvin’s earlier stories—those from before his professional life took root—shine a light on the making of Mr. Photosynthesis.

Calvin remembered the moment he decided to become a chemist. It was that same year of high school, from 1926 to 1927, and Calvin stood in the grocery store that his father strained to keep solvent. Calvin’s working-class family didn’t always make ends meet. The 1920s may have been “roaring” for some, but like today, a great and growing gap separated rich from poor. Calvin’s family was the latter. “He was struggling,” Calvin explained of his father, “and I worked in that store with him.” At the age of sixteen, Calvin recalled, “I looked around and I saw that everything in that store depended in some way on chemists, from the labels on the cans to the food inside, the ink, the paper, everything involved chemistry.” His father’s struggle for security shaped young Melvin Calvin. “I wasn’t going to do that,” he deduced. “I was going to have something that was interesting to do and would make me a living at the same time.” Like his high school teacher’s rebukes, Calvin wanted no guessing whether or not he’d have a job.

Chemistry would become Calvin’s career, but he craved more than mere science. Sports never suited him, so in high school, he joined the debate team, and he was “in the plays, you know, dramatic things. … We put on a ‘Midsummer Night’s Dream’ and I was [Nick] Bottom.” At that time, Calvin confessed, “I was round, you know … so I played Bottom for obvious reasons!” Bottom’s asinine metamorphosis brings comedy to Shakespeare’s play, but more fitting for Calvin, the part also attunes the audience to meaningful themes like the relationship between reality and imagination. Bottom’s down-to-earth character, more than any other in the play, delves deep into the forest where he transcends his working-class identity to experience nature’s magic, enchant a fairy queen, and return having had “a most rare vision … a dream, past the wit of man.” Calvin’s continual wonderment in nature’s mysteries eventually made him one of the world’s leading biochemists.

In an era that lamented growing gaps between the humanities and science, young Melvin Calvin built bridges. Upon completing high school at age 16, Calvin began engineering courses at the Michigan College of Mining and Technology on the state’s remote Upper Peninsula. “I knew my opportunities there were limited,” Calvin disclosed, “because it was what it was, an engineering school.” After his first two years there, his family’s faltering finances forced his return to Detroit. “By that time,” Calvin recalled, “I already began to realize I needed intellectual exploration … I needed some broadening.” In the evenings Calvin worked in a Detroit brass factory chemically testing metal tailings, and during the day he took classes. “After two years in engineering school I went to Wayne State [then Detroit City College] and I didn’t touch an engineering subject. I didn’t go near one. I took history and art and psychology … That was a deliberate choice.”

Calvin continued his “broadening” in both science and humanities while completing his degree at Michigan Tech, earning his PhD from the University of Minnesota, and completing a postdoctoral fellowship in Manchester, England. Inside the laboratory, Calvin analyzed radioactive elements with varied half-lives. But outside the laboratory, rather than read scientific literature, he “preferred books that had a long lifetime.” He read creative classics like Don Quixote, Anna Karenina, and War and Peace. “These were novels to live in,” he remembered fondly, “you don’t live in the technical literature.” While reading War and Peace, for example, “I didn’t go to work, I didn’t do anything for about 10 days, you know, I read that book. I just got up and read it, had my lunch and read it, had my dinner, went to sleep. … I didn’t go to work. I read the whole thing in one sitting. It didn’t help much in terms of time, but I can remember doing that. I lived in that thing. … [T]hat was a very powerful experience.”

The memories Calvin explored in his oral history interview inspired a realization his scientific publications never revealed. After bringing his curiosity and creativity to Berkeley’s College of Chemistry in 1937, Calvin’s research with radioactive particles in plants earned a Nobel Prize in 1961. More than a decade after that award, Calvin reflected on the high school science teacher who told him to stop asking so many questions. “The more I learn about science in the ensuing forty years, the more I realize that guessing is the really creative part of science. That the gathering of data and the drawing of conclusions is really a computer operation. The part of it that isn’t a computer operation is the really creative part, and that’s the guessing.” Melvin Calvin’s oral history interview shows the human side of science—how the elemental and the imaginative, in conjunction, advance our knowledge of nature. The memories and insights in Mr. Photosynthesis’s interview reveal how a scientist, and how science itself, can grow.

Melvin Calvin’s oral history interview was recorded over several sessions between October 1974 and March 1978, as part of a series dealing with the development of nuclear research at Berkeley. The Oral History Center recently digitized the printed transcript of Calvin’s interview, previously available only at the Bancroft Library. The Oral History Center and archivists at the Bancroft Library are currently working to digitize the reel-to-reel audio recording of Calvin’s interview.