You may have seen an earlier post in this blog about a library research journey, related to a study on the morale of library staff.  There is a growing body of work exploring the morale of librarians, but not much on that of library staff, and like any good researchers, our research team (librarians, staff, and former library staff) pounced on the gap in the literature! That earlier post outlines how the project got started, its early phases, and getting to the point of presenting our initial findings.  As well as the fact that the interviews and in fact the entire process pretty much happened during a pandemic.

But, when that was written, we hadn’t done any detailed data analysis yet, and we were still a ways away from the ultimate goal of publishing the study, in order to make it widely useful.  Well, nine months later (amazingly quickly) that day has arrived—goal met, destination arrived at, pot of gold at the end of the rainbow, in hand!  The paper has been published!  Here’s what happened between then and now.

First, we actually got invited to submit the paper, by the editor of the Journal of Library Administration.  That was pretty exciting in itself, and surely is largely due to the above-mentioned lack of research on this topic.  Next, came the actual analysis of the transcripts of the interviews, conducted with library staff nationwide, using the qualitative data software MAXQDA.  Using a tool such as this helps ensure that there is rigor in extracting the themes from the content, and I can testify that this process brings up themes and patterns you might not otherwise expect or extract! Then, because of the choice to use a research method called grounded theory, it was important to develop a theoretical model of what had evolved (this happens after extracting the themes).  That brought up even more relationships and connections to consider! 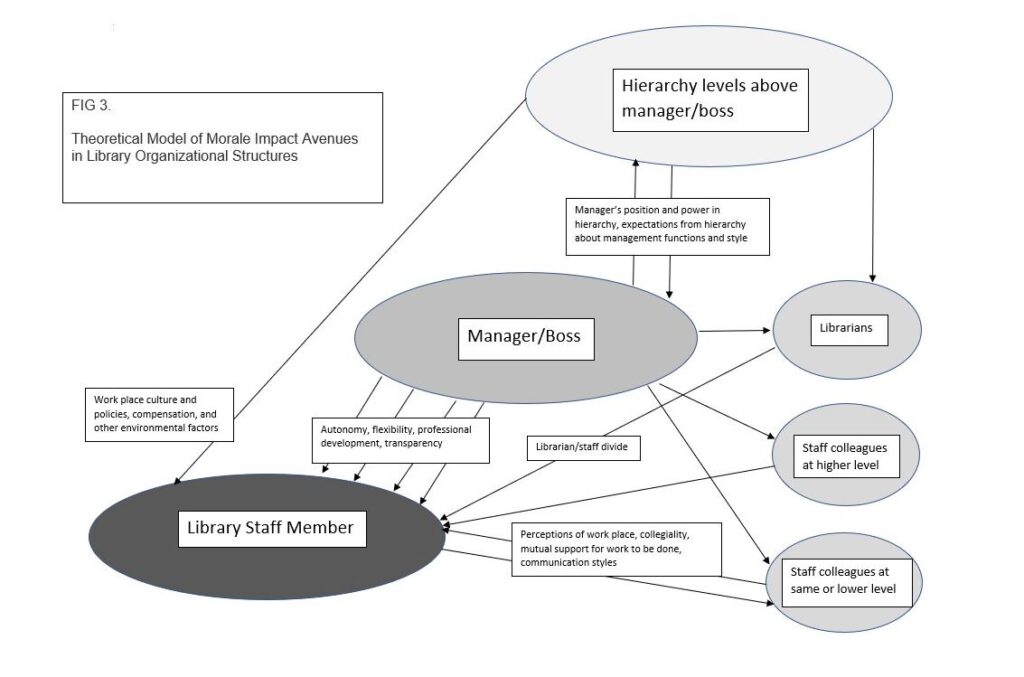 At this point—time to write.  Not in order—it was easiest to warm up with the introduction and methods sections, and actually the discussion and conclusion sections came next, since we’d already presented on the material and had a sense of what those would look like. After that came the literature review.  Yikes, we had a Zotero library of more than 90 articles, of which 62 made it into the paper as references.  That was a lot of synthesizing!  But it also meant we could confidently say that we believe this is the very first in-depth qualitative study of the morale of library staff, which makes us feel that our work may be able to help libraries create positive changes for staff in library settings.  By the way, using the citation management software Zotero, that reference list of 62 was populated in Word instantaneously, a far cry from the hours I spent typing the references for my dissertation on a typewriter!

Finally came the results section, the core of what we had found out, which notably includes many quotes representing the lived experiences of our 34 wonderful respondents. And, while this is not commonly done, it made sense to include not just ideas for directions for future research, but also some of the broader questions needing to be answered, that came from the wisdom of attendees at our presentations.  There are also appendices with everything anyone would need to recreate our study.  Which we very much hope someone will do, in the new post-COVID normal.

Next—the maze of submission to the journal: forms, making sure that author guidelines were strictly adhered to, and similar.  And the waiting!  It takes time to send a paper to be peer reviewed, to get and address the comments and resubmit, and get a final acceptance. But that all happened, and along with it, the chance to exhale after two years of work.

An important final detail involved whether or not the paper could be published open access, that is, freely available to ANYONE who clicks on it, whether or not their library carries the journal title. Publishing open access would be one way to honor our amazing 34 respondents, meaning that library staff who need to see and think about these issues can download immediately.  But, the out of pocket cost to us from the journal (called an article processing charge, or APC) would be $3085.  Impossible. Given that price, it would have to be OK to just deposit the pre-print in the UC’s eScholarship portal, and it could be found that way.  But then we learned that UC Berkeley authors, through an agreement between the California Digital Library and the publisher, could get a 75% discount on the APC—almost exactly what we had left in our research funding from LAUC! So, now on the upper right of the article’s landing page you can see that beautiful, beautiful open access logo.  If you are reading this, you can read the article too!

We hope you’ll take a look, and send comments and questions our way, to librarystaffmorale@berkeley.edu.  Thanks for reading this, and celebrating with us!