Two decades ago, I made my first research trip to the California State Archives. To be sure, having the primary repository of the state government in one’s backyard is a benefit not every Sacramento resident readily appreciates. Yet as a young history major at Sacramento State University, the building located at 10th and O Street stood as equally prominent as the historic Capitol two blocks away. It was in the third floor reading room of the archives that I cut my teeth as a political historian, carefully sifting through the papers of some of California’s most renown politicians: Governor Earl Warren; Assembly Speaker Jesse Unruh (aka Big Daddy); and the indelible Senator Randolph Collier, popularly known as the Silver Fox of Siskiyou County. I still remember the excitement of my first peek behind the political curtain with the archival material, getting the backstory of an event or piece of legislation that the press didn’t report, and thus the public never knew. I also remember the day a friendly archivist expanded that historical purview by introducing me to the volumes of the State Government Oral History Program, a treasure trove of political history that not only significantly impacted my archival research, but consequently, my career as a historian.

Oral history is commonly seen as a “bottom up” endeavor, where the stories and experiences of everyday folk—generally speaking, those who don’t leave written records—are captured and preserved in the historical record. The vital contributions such “bottom up” oral history has made to our understanding of the past is a book-length discussion in and of itself. It has not only underpinned the development of Ethnic Studies, for instance, but also helped make those fields of study—and the diversification of the past they bring—mainstays within educational curriculum throughout the country. In similar fashion, oral history has also proved pivotal in deepening our understanding of history from the “top down.” Over the years, my research in political history expanded well beyond the State Archives in Sacramento to include more than three dozen repositories across the U.S. and Canada. And at each archive, oral histories provided crucial insight and context to the material, and therefore a more thorough understanding of the respective topics and individuals under examination. Thus, while the history profession teaches us to value the archives above all else, I came to see, like so many before me, that archival documents alone don’t provide the whole story. From my experience, to fully understand, say, the operation and structure of Ronald Reagan’s Administration, or the political strategies of Richard Nixon and Lyndon B. Johnson, oral histories had to be part of one’s research repertoire. 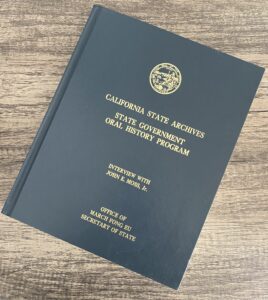 It was this appreciation of oral history’s contributions to the political past that led the California Legislature to create the State Government Oral History Program in 1985. Coordinated by the State Archives, the program sought to document the history of those who had worked in the state’s legislative and executive branches with the aim to preserve California’s institutional memory for future generations. A program of such size and scope required an extraordinary level of collaboration, not just between state agencies, but also between the State Archives and the university-based oral history programs throughout California. These university partners included UC Davis, Sacramento State University, California State Fullerton, UCLA, Claremont Graduate School, and of course, the Oral History Center at UC Berkeley (known then as the Regional Oral History Center). By all accounts, the State Government Oral History Program was as impressive as it was successful. Well over 200 interviews had been conducted by the early 2000s, totaling thousands of hours of recordings. And true to its mission, all interviews were transcribed, bound, cataloged, and made available to the public at the State Archives. Within its first two decades of operation, the program had not only proved instrumental in compensating for gaps in California’s official record, but also came to serve as a model for similar efforts among other states and on the federal level.

Due to severe budget constraints, however, funding for the program was cut in 2003, resulting in what would become a fifteen-year hiatus in the program’s operation. To be sure, the impact of that gap will be long-felt, and in some cases unrecoverable. Many influential lawmakers and civil servants unfortunately passed during that time, while others succumbed to the various ailments of age. Moreover, term limits in the state legislature presented another hurdle for the program’s renewal as institutional memory faded with each election cycle. The dilemma proved stark: how could the program be placed back in the state budget when fewer and fewer legislators remembered such a program ever existed?

Luckily, there were those in state government who did. When I joined the OHC in 2016, reestablishing the state program that introduced me to oral history stood as my top priority. And as fortune had it, my efforts immediately found sympathetic allies both on campus and in Sacramento. My colleagues at the Center offered a steady stream of support, especially OHC director Martin Meeker, who accompanied me to more meetings in Sacramento than he cared to count. Other allies included: State Archivist Nancy Lenoil (now retired); Steve Boilard, director of the Center for California Studies at Sacramento State University (now retired); and State Librarian Greg Lucas. Together, we initiated a collaborative, multi-faceted effort to renew the program and have its funding restored in the state budget. We held events in Sacramento, inundated email inboxes with informational flyers, lobbied and educated legislators on the existence of the program, and began to build the groundwork at the State Archives for an advisory council to assist in creating the list of interviewees. Our efforts eventually paid off. In 2018, the State Government Oral History Program was finally renewed.

In the years since, work on behalf of the program has proceeded at an increasing pace in the effort to make up for lost time. Governor Jerry Brown was selected for the program’s inaugural interview in 2019, an oral history conducted by myself, OHC director Martin Meeker, and KQED senior political editor Scott Shafer. Indeed, Governor Brown was a fitting choice for the program’s relaunch, as his 40+ hour oral history represented a tour de force of California political history, from his father’s gubernatorial administration to his own half century in politics. Other program-sponsored oral histories include the Women in Politics project, which is currently underway at Cal State Fullerton and features oral histories with the founding members of the California Legislative Women’s Caucus. The program also sponsored the Global Warming Solutions Act (AB32) Project which I am conducting in collaboration with the USC-Schwarzenegger Institute. This project features oral history interviews with Governor Schwarzenegger, as well as key members of both his administration and the legislature regarding the passage and implementation of California’s signature climate law. This past spring, the OHC also conducted oral histories for the program that focused on the state’s legislative caucuses in the long-overdue effort to document the ethnic diversification of the California legislature. These interviews were conducted by OHC interviewers Amanda Tewes, Shanna Farrell, Roger Eardley-Pryor, and myself.

In the new fiscal year, I’m happy to report that the State Government Oral History Program has officially been awarded a three-year renewal. We at the OHC are proud to continue our work with the state program, and collaborate with the oral history centers at Cal State Fullerton and San Diego State University in this important effort. One of the flyers used in the renewal campaign included the epigraph: “Charting a good path forward is inextricably linked to understanding the terrain previously traveled.” To be sure, such words ring true for the study of history in general. Yet, they especially resonate with endeavors like the State Government Oral History Program, where the recording and documentation of the political past helps shape the public policy of tomorrow.