As staff eagerly anticipate a return to more regular on-campus work, we have a guest posting by pictorial processing archivist Lori Hines. She provides a peek at one facet of work that we have been doing remotely in 2020-2021. -JAE

A posting by Lori Hines

One of my recent projects was to improve the description of items from the James D. Phelan Photograph Albums, BANC PIC 1932.001–ALB ,  which were scanned many years ago with only brief caption transcriptions. This photograph in album 85 is identified only as “Geneveve” [sic]. 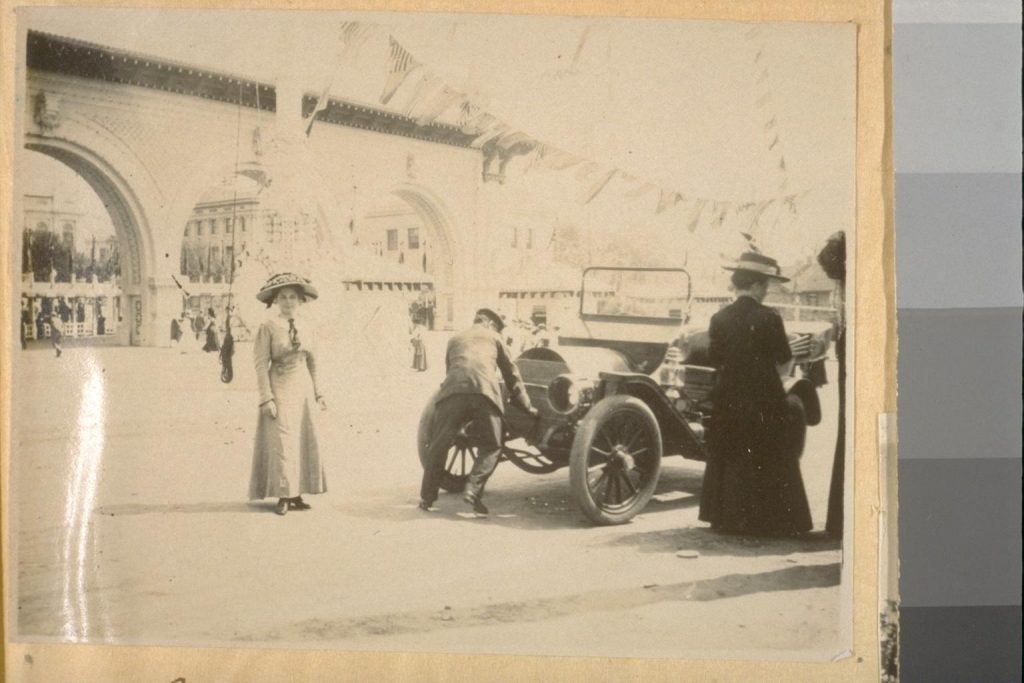 Having previously worked on collections related to the Panama-Pacific International Exposition, I had an idea that Geneveve, or Genevieve, could be posed at a similar event. Currently the photo is essentially unidentified and lost in the sea of images.

Doing a quick Google check, I typed in “Exposition US 1909”, and voila, I easily confirmed that Geneveve must be at the 1909 Alaska-Yukon-Pacific Exposition held in Seattle. I then added “entrance” to the search, because there appear to be turnstiles behind the arches. Google image search gave me some pretty good matches. There was one image from the Seattle Municipal Archives that showed the turnstiles with part of the arch. A couple of other pictures had better views of the arch.

“Geneveve [Genevieve?] [People by car at entrance to the Alaska-Yukon-Pacific Exposition, Seattle, 1909].”

Once the improved finding aid data has been uploaded, the topic will be retrievable by keyword searching at both the Digital Collections website  and the Online Archive of California.

Not all of the items get this depth of attention, but this is one example that is worth the extra time. It’s been difficult being away from collections and researchers for over a year, but there is no shortage of online content with minimal identification, so there’s gratification in taking this time to make improvements.