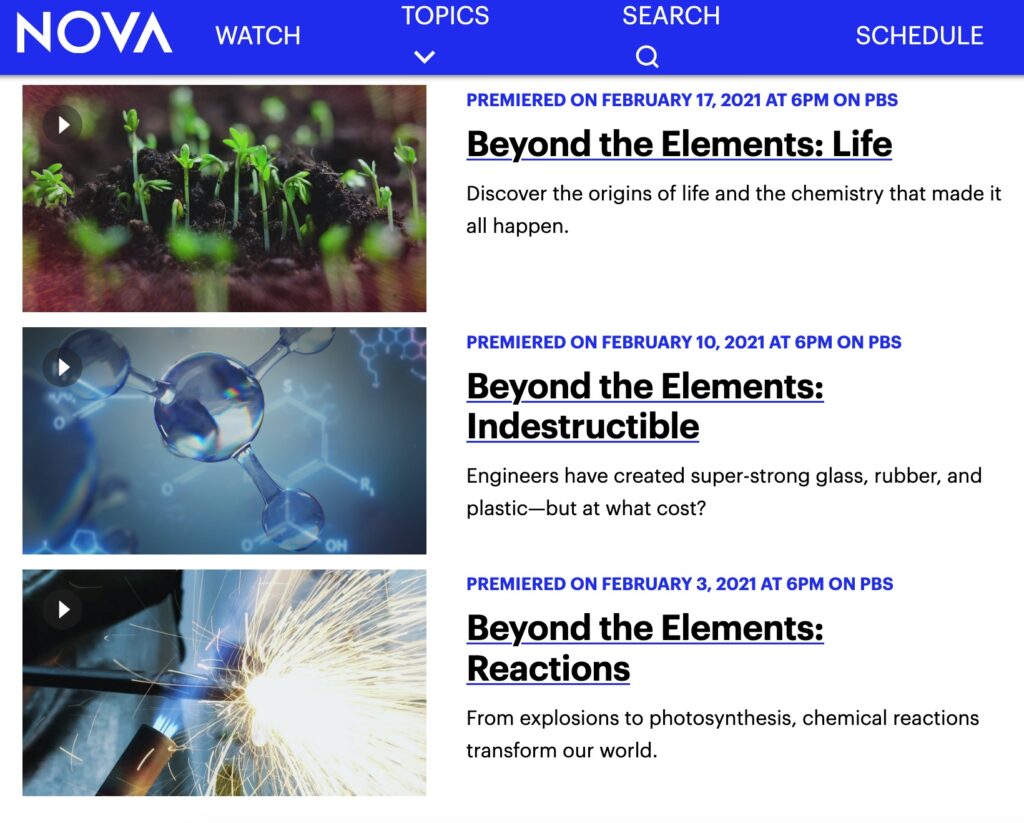 On March 12, 2020, an email arrived asking me to review three final scripts for the science series NOVA, the most-watched prime time science series on television with nearly five-million weekly viewers. Nearly a year later in February 2021, I’m delighted to see those NOVA episodes premier on PBS as the three-part series “Beyond the Elements.” The first episode focused on molecular Reactions, the next on virtually Indestructible molecules, and the third episode explored molecules of Life. Watching these episodes and reading my name in the credits as a “Science Advisor” for NOVA was thrilling.

But let’s be honest: after this past year, I’m delighted to have thus-far survived the pandemic and everything else that 2020 threw at us! From shelter-in-place to shuttered businesses, from Zoom meetings to elbow-bump greetings, from wild fires to fascism, and from righteous calls for racial justice to right-wing mobs denigrating our democracy, it’s been one hell of a year. Watching these NOVA episodes on PBS offered me a reminder of all that we’ve experienced since March 2020 when I received that email to review NOVA’s final scripts. Reflecting on this past year, I now see how working on those NOVA episodes helped me to muddle through that difficult time last spring. It re-inspired my fascination with science as well as my passion for oral histories with wondrous people, several of whom do the fascinating work of science. Reviewing those scripts also helped me imagine a future beyond the then all-consuming pandemic.

What are your memories of March 2020? Mine are saturated in fear. I recall dizzying levels of anxiety. Focused concentration felt nearly impossible. So much seemed unknown in March 2020, but we knew enough to be scared. We knew a novel virus that emerged in China was spreading rapidly around the world, and especially, by then, throughout the Bay Area here. We knew of no medical treatment to stop its spread or its effects. And we knew many people would not survive this new disease. For me, fear of what we did know as well as what we did not know felt crippling. Yet in my inbox appeared that email reminding me quite kindly of my earlier agreement to continue reviewing and advising on these three NOVA scripts. They asked: would I be able to return my reviews in the next two weeks? I thought: would my family and I even be alive in two weeks? At least, that’s where my mind was at in March 2020. Even so, I agreed to return my edits as quickly as I could—perhaps as a kind of pandemic denial, a naive attempt to reclaim normalcy. 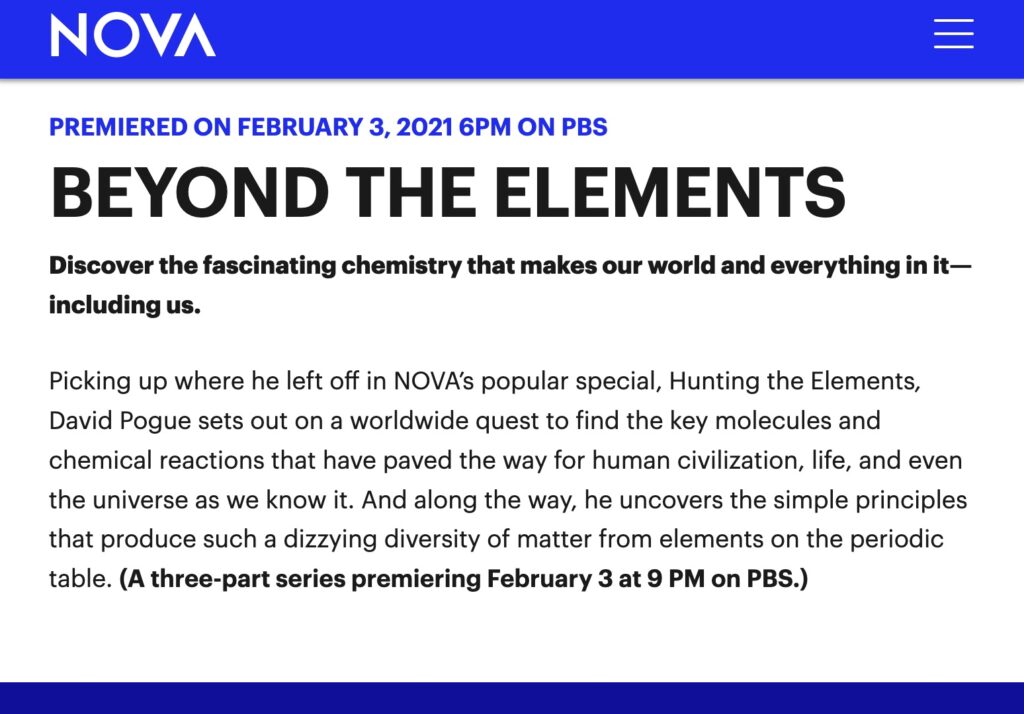 As it happened, reviewing those scripts was both interesting and inspiring. Interesting, of course, because NOVA’s episodes of “Beyond the Elements” are captivating. The shows build from NOVA’s earlier special episodes on hunting atomic elements with these new episodes exploring the key molecules and chemical reactions that have shaped and continue to shape our lives and the universe as we know it. David Pogue hosts these episodes in his adventurous and cheeky way with excellent demonstrations and explanations by leading scientists, all accompanied by beautiful graphics and special effects. These stories about nature’s most fascinating molecular interactions are delightful, as are the scientists themselves who tell those stories.

To my surprise, reviewing those scripts last spring also gave me hope and helped lift me out of my initial, deep COVID despair. After prior years of commenting on and reviewing iterations of scripts for “Beyond the Elements,” that last round of edits in March 2020 arose at a difficult time. But that work helped ground me with a higher purpose and a commitment to others. It enabled my imagining of a future when this NOVA series would finally broadcast to millions of viewers. It helped move me beyond my immediate fears during that harrowing March of 2020. And it helped me, as an oral historian, to re-engage in our sacred project of building knowledge and sharing it through engaging narratives.

Upon submitting my review of the NOVA episodes, I found renewed purpose for sharing our own delightful stories about science as told by our fascinating oral history narrators. My colleagues in the Oral History Center all re-committed to our ongoing projects that spring and summer. Pandemic notwithstanding—very much in spite of it—we adjusted to our newly required remote-working situations, and we adapted our work flows, our fundraising, and our interviewing to not just survive this pandemic, but to find and create meaning during it. And through our collaborations, we even finalized a few of our own oral histories that, like NOVA’s “Beyond the Elements,” explore the interactions of molecules.

By August of 2020, we published my fifteen-hours-long interview with Alexis T. Bell, the Dow Professor of Sustainable Chemistry in UC Berkeley’s Department of Chemical and Biomolecular Engineering, who is a world-renowned leader in catalysis and chemical-reaction engineering.  In September 2020, Paul Burnett published his detailed oral history with John Prausnitz, a professor since 1955 in Berkeley’s Department of Chemical and Biomolecular Engineering, who helped pioneer the field of molecular thermodynamics. And in October of 2020, we published my oral history with Michael R. Schilling, a chemist in Los Angeles at the Getty Conservation Institute who specializes in new and complex methods for analyzing the molecules in materials used by artists and art conservators.

For me, that work last spring on NOVA’s “Beyond the Elements” helped me discover a way to move beyond the pandemic. It helped refocus my privilege and pleasure in recording, preserving, and sharing the life stories of our oral history narrators. And while I wish our struggles with this ongoing pandemic were over, I’m very pleased to see all that we’ve accomplished this past year in the Oral History Center. Back in March 2020, when reviewing those final scripts for NOVA, I imagined the episodes would eventually premier at a time when the world had returned to “normal,” whatever that meant. As it happened, the episodes’ premiers in February 2021 occurred amidst our continued pandemic, which has lasted so long it seems to have become our new normal. Even if our slow and sad dance with COVID-19 continues, I’m very pleased to have seen “Beyond the Elements” broadcast on PBS and to be listed as a “Science Advisor.” And I’m equally grateful for the lessons those episodes taught me, both about the science of molecular interactions but especially on the importance of meaningful endeavors during difficult times.