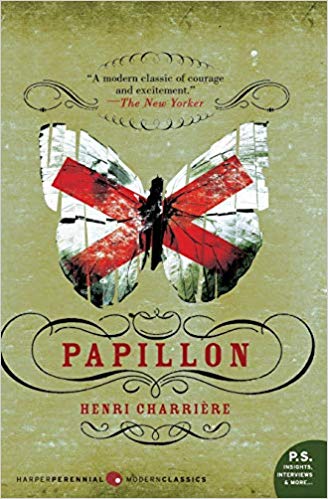 The true prison story of wrongly convicted Henri Charrière’s Papillon (the nickname given to him because of the butterfly tattoo on his chest) takes many turns up and down the penal colony of Cayenne in French Guiana and across South America.

Upon arrival, he befriends a convicted banker/counterfeiter, Louis Dega, and initially uses him to finance his escape. What starts out as a self-serving tactic of prison survival eventually turns into a deep friendship as they are repeatedly caught, and Henri refuses to name names to the prison authorities. This costs him many years of solitary confinement under the most inhumane conditions.

He is eventually taken to Devil’s Island, off the coast of French Guiana, where his old friend Louis also lives. The island’s fame for inescapability doesn’t frighten Henri as he plans his final escape.

One of the best reads concerning friendship, struggle, and man’s desire for freedom.