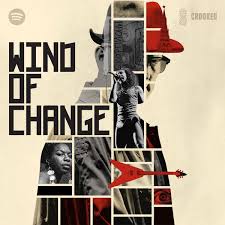 German heavy metal meets Cold War intrigue. If you are looking for a fun listen during shelter-in-place, I highly recommend the podcast Wind of Change!

While many Americans have not even heard of the Scorpions, this German band that sings in English has diehard fans all over Europe and Asia. Formed in 1965 in Hanover, Germany, three of the five band members have been playing together since 1978. They continue to tour internationally.

And what makes the song “Wind of Change” so fascinating is its resonance with the zeitgeist of 1990. The song was supposedly written after the band played in Moscow in 1989 and was released shortly after the fall of the Berlin Wall. For many, the song represents the “change” happening across Europe that led to the collapse of the Soviet Union. But as Keefe points out, “Wind of Change” isn’t just the soundtrack to the end of the Cold War, but also a song with modern resonance. When he saw the Scorpions live in Kiev, Ukraine, alongside huge crowds, Keefe was reminded that the country was actually still at war with Russia, trying to maintain its post-Cold War independence. For Ukranians at least, “Wind of Change” is not just nostalgia, but a sort of call to arms.

Keefe’s previous work inlcudes his 2019 book Say Nothing: The True Story of Murder and Memory in Northern Ireland, which the Oral History Center chose as its inaugural book club pick. In Say Nothing, Keefe explores the challenges of The Troubles in Northern Ireland, alongside the murder of Jean McConville and the Boston College Belfast Project oral histories. In Wind of Change, Keefe encounters similar challenges working with former spies as he did with former revolutionaries in Ireland: lies and obfuscation.

The delight of listening to this story in a podcast format is the ability to hear the song itself, the enthusiasm from live Scorpions audiences, archival and new interviews, and provide some (but not enough for their taste) anonymity for former clandestine officers. But Wind of Change offers more than just great audio, it also takes the listener on a journey into how to investigate a thirty-year-old story, following oddball leads – even to a G.I. Joe convention – and invites skepticism about what information to actually believe. Indeed, the podcast also questions the nature of storytelling around this rumor and its role in continuing the myth making around the CIA. But Keefe also wonders: how do you uncover something that (if true) was among the top CIA secrets during the Cold War? As an oral historian, I would add that these events have also been diluted by memory and time, and those who can speak to the true origins of “Wind of Change” may no longer be able to do so.

The podcast Wind of Change is not just a fun listen about a campy band and Cold War CIA operations, but also a compelling story and a great distraction. Find out more about Wind of Change, or listen to all eight episodes right now on Spotify.