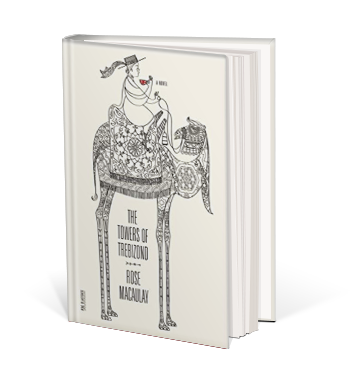 The Towers of Trebizond
Rose Macaulay

The main character, Laurie; her plump, adventuresome, intellectual Aunt Dot; her somewhat objectionable Anglican Father Hugh Chantry-Pigg; and a white Ruwallah camel embark from England on a missionary reconnaissance–or an Anglican spying expedition, as Laurie comically refers to it–to the unconverted peoples of the Black Sea region. (Part of Aunt Dot’s purpose in going is that of “…sizing up the situation and the possibilities, and telling women about the Anglican Church…and about what a good time Christian women had, wearing hats and talking to men, not having to carry the loads, and being free to go about and have fun like men, and sometimes ride donkeys instead of walking.”)

As Laurie narrates their travels through Turkey and Syria, intertwined are her observations of the peculiar ways of organized religion and her musings on her own spirituality. Adding to the truly great appeal found in the language and witty voice of the book, Laurie’s and the other characters’ vast classical knowledge of literary and ancient history also shines through all their adventures.

That’s it for the 2019 Summer Reading List! See you next summer!