The Oral History Center has had a productive year, and interviewed many people. Here’s some of our favorite moments from our 2018 interviews. We hope you enjoy them as much as we did!

Of the dozens of revelatory, challenging, or even hilarious moments in my interviews this year, I find it difficult to highlight just one. But I keep coming back to this moment in my interview with famed ACLU attorney Marshall Krause. Krause defended a number of individuals charged with obscenity in San Francisco in the 1960s, including Vorpal Gallery owner Muldoon Elder for putting Ron Boise’s erotic Kama Sutra sculptures on display. While recounting the story, Krause mentioned that he had one of the artworks in question, so I asked him to bring it out to show on camera. I then asked him to provide the kind of defense he did in the courtroom in 1964. Krause’s sensitive, insightful, convincing words made it obvious why the jury acquitted Elder of the charges, thus giving Krause and the cause of the freedom of expression a victory.

My favorite interview moment of 2018 occurred when I interviewed Bay Area herbalist and aromatherapist Jeanne Rose.  In the 1960s, Rose was the couturier for bands like Jefferson Airplane and was very plugged into the local rock and roll scene.  During one of our sessions together, Rose recounted her experience at the Altamont Speedway Free Festival on December 6, 1969, when an agitated audience of about 300,000 erupted into violence.  Rose watched the chaos from above the crowd, but still recalls the strong emotions from that day.  Hearing about the event firsthand reinforced how scary and chaotic the events must have been for concert goers.  Interestingly, Rose marked this concert as  “the end” of rock and roll.

This is an excerpt from an unpublished interview with UC Berkeley Engineering Scientist Emeritus George Leitmann on his service in the US Counterintelligence Corps during and after World War II. Prior to this assignment, he worked in reconnaissance as a US combat engineer attached to the French Army, behind enemy lines. It is worth noting that a significant portion of Dr. Leitmann’s career has been devoted to accounting for extremely improbable and potentially catastrophic events when designing models and systems:
“Right at the end of the war, there was a suspicion that the Nazis
had started an underground called the Werewolves. We spent quite a bit of
time on that for the first few months. I don’t think we ever found any. We
once raided an outfit that were presumably Werewolves. I don’t remember
what happened to them, except that we sort of used movie techniques to make
the raid, coming through the skylights.

My favorite moment this year was interviewing Professor James C. Scott at his farm in Durham, Connecticut.  The Sterling Professor of Political Science and Anthropology at Yale University, Scott is widely regarded as one of the most influential thinkers of our time, producing an unparalleled corpus of books over the last 50 years on peasant politics, resistance, and state governance, which today are standard reading across a host of disciplines worldwide.  Yet in the interviews, we get a glimpse of the unassuming human being behind the books as Scott discusses the two principles that have always underpinned his approach to academic work – principles he stresses . The first: “Don’t ever be afraid to be an army of one in a crowd of a hundred,” a philosophy of independence he came to embrace during his Quaker education as a young man.  The second: “If you’re not having fun, what the hell are you doing?”  For those who know Jim Scott, the latter is certainly an oft-quoted remark he has extolled to colleagues and graduate students for decades.  Spending the weekend at his farm, I quickly realized that those principles were not just lofty ideals, but words he lived by, and I would be wise to do the same.

My favorite moment this year was during an interview with WWII Veteran Lawson Sakai, who is in his nineties, for the East Bay Regional Park Parkland Oral History Project. Sakai’s parent immigrated from Japan, making him Nisei, or second generation. He spoke about needing to flee California to avoid internment, and the role that farming in the Central Valley played to rebuild the Japanese community in the aftermath. Driscoll Farms was just getting started and needed help growing strawberries. They recruited Japanese farmers, asked them to farm the land, and split profits with them 50/50. After hearing how Driscoll helped many people get back on their feet after losing everything in the wake of Executive Order 9066, I scoured my food history books and didn’t find any information about this. I felt like I had stumbled upon a hidden historical gem.

Interviewing Aaron Mair—the 57th president of the Sierra Club and the Club’s first African-American president—provided my favorite interview moments this year. We conducted Aaron’s initial interview session at the Hagood Mill Historic Site in the upcountry of South Carolina. As his family’s genealogist, Aaron has the 1865 records of his enslaved great, great grandfather Zion McKenzie’s emancipation from the Hagood family. Before interviewing at the Hagood Mill site, Aaron and I visited the humble, un-fenced cemetery of his enslaved ancestors, whose rough, uncut gravestones lay just outside the Hagood family’s iron-fenced grave site with grandiose tombs and Confederate soldier crosses. Later, during his interview, Aaron recounted his ancestors’ remarkable stories from slavery to freedom and their purchase of farm land that remains in Aaron’s family today. His family’s narrative, from human dominion to sustainable stewardship of land, informs Aaron’s ideas on environmental responsibility. And it helped inspire Aaron’s initiatives as Sierra Club president to unify activism for environmental rights with civil rights and labor rights. Aaron takes seriously Sierra Club founder John Muir’s admonition that “When we try to pick out anything by itself, we find it hitched to everything else in the Universe.” 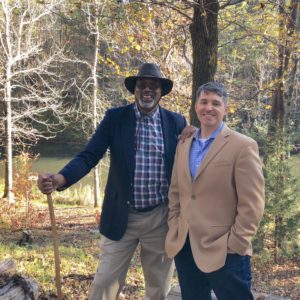