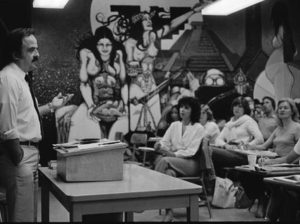 Today, courses on the Mexican American experience can be found at nearly every college campus across the nation. In an academic environment long entrenched within the mold of Western Europe, such curriculum is nothing short of a miraculous testament to the diversification of American education.  Indeed, the subject has its own journals, national organizations, student groups, academic departments, and specialized degrees. Yet fifty years ago, the discipline of Chicana/o Studies—as the field of study became known—was just taking shape and, above all, struggling for legitimacy.

To commemorate the 50th anniversary of the discipline, the OHC initiated the Chicana/o Studies Oral History Project. Led by Todd Holmes, the project documents the historical development of the field through in-depth interviews with the first generation of scholars who shaped it. Holmes began working on the project in the fall of 2016 with the initial step of putting together an advisory council composed of Chicana/o scholars from around the country. Based on the council’s recommendations, over 25 prominent scholars were selected to be interviewed—scholars whose pioneering research and innovative work played a significant role in building the discipline over the last five decades. Holmes then commenced an ambitious fundraising campaign, going directly to the home universities of the featured scholars. To date, the project has received generous support from a host of academic institutions, including the University of California Office of the President, California State University Office of the Chancellor, Stanford University, Arizona State University, and the University of Texas at Austin.

The interviews will offer an important look at the formation of Chicana/o Studies, as well as the experiences of those who built it. Such areas of discussion include their family background, undergraduate and graduate experiences, and academic career as faculty members. With most—if not all—of these scholars standing as the first in the families to attend college, and certainly among the first cohort of Mexican American graduate students and faculty, their experiences highlight the evolution of the field, the diversification of higher education, and the long struggle that underpinned both. Moreover, the interviews trace significant shifts within the field of Chicana/o Studies over the decades, and how the field expanded from college campuses in California and Texas to a nationally recognized discipline of study.

All interviews are slated to be completed by the summer of 2019. When done, they will be featured on a dedicated page of the Center’s website. Moreover, the oral histories will form the heart of a documentary film, tentatively titled, Chicana/o Studies: The Legacy of A Movement and the Forging of A Discipline. The OHC is thrilled to make this foray into film and collaborate with veteran producer Ray Telles and others in this exciting effort.  Stay tuned for further updates in 2019!

For more information on the project, its participants, and to view the film’s trailer, visit the project page..