The Library has started a trial for an online resource that is entitled “Mexican Cinema Online.” Below are the details of this trial. I will be grateful if you can please provide me your feedback and assessment on the utility of this resource for your research and teaching.
Please authenticate using the VPN or Ez proxy if you are accessing this resource from an off-campus location. Also, during the trial period, the downloads are not permitted.
If you now go to http://primarysources.brillonline.com/browse/mexican-cinema you will find you have complete access to the resource.
General details:
Site address:    http://primarysources.brillonline.com/browse/mexican-cinema
Product:         Mexican Cinema Online (Classic) (on BRC)
Brill sub-id: 47337
Start date:      19 Feb 2018
End date:        20 Mar 2018
Brill sub: Status: OK
Please let me know if you have any questions or comments. 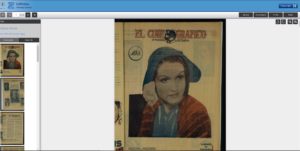 Mexican cinema, from its beginnings in the late 1890s to its Golden Age (1930s to 1960), was consistently the largest and most important of all the Spanish-speaking countries. During its heyday, the Mexican film industry produced an average of one hundred films annually and supplied screen entertainment to both domestic audiences and international markets in Latin America, the United States, and Europe. The Golden Age of Mexican cinema is illuminated in this collection of popular movie periodicals. Not only does it include chief magazines such as Cinema Reporter (1943-1965) and Cine Mundial (1951-1955), it also features two extremely rare issues of El Cine Gráfico from 1935 and copies of the weekly El Mundo Ilustrado (1902-1910), an arts magazine that also contained notes on movies. The true extent of the popularity of Mexican film is illustrated by Cinelandia (1931-1947), which was published in Hollywood both in Spanish and in English. This collection also includes some fifty rare lobby cards, which were used to advertise a film. Finally, for the first time this collection gives access to the personal scrap book of Fernando de Fuentes (1894-1958), one of the leading Latin-American filmmakers to this day. It contains reviews, movie stills, programs, and advertisements, shedding a unique light on the career of this pioneering director.

The sources in this collection, heretofore only accessible in the archives of the Filmoteca de la UNAM in Mexico City, will be invaluable to researchers and students working on Film and Media Studies, Latin American Studies, and many other aspects of the historical, social, and political impact of cinema.