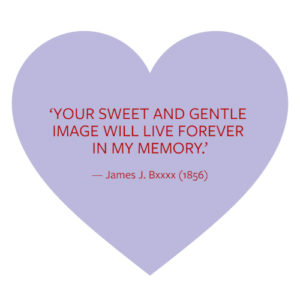 In 1922, Firgie Todd wanted to make a shirt for her boyfriend, Charlie Smith. Todd had forgotten to take Smith’s measurements the last time she’d seen him, however, and the two lived far apart, on opposite ends of Humboldt County, California.

But Todd, a clever woman, had a plan.

“I do not suppose you have a tape measure,” wrote Todd in a Dec. 11, 1922 letter. “So I shall enclose a piece of string, and you please cut it off the length of the inside seam.”

The charming correspondence can be found in a box of material on the family of James Samuel Todd — a Presbyterian minister who moved to California in 1868. Firgie Todd was James Todd’s granddaughter, and hers is one of many love letters living in The Bancroft Library.

The letters, which go back to at least 1851, when the California Gold Rush tore many a lover apart, document the quirks and pains of love through war, separation, and cultural strife. In a pre-digital, largely pre-automobile world, the letters show the resolve and resourcefulness of long-distance relationships, kept alive through streams of affection and babble. In many cases, letters traveled between lovers as if on a merry-go-round, coming and going precisely each week.

And so, for the lover in you this Valentine’s Day, here’s some inspiration from lovers past, pulled from the troves of the Bancroft collection. The quotes are grouped by common themes that reflect the sentiments of nearly 120 letters between seven pairs of lovers. 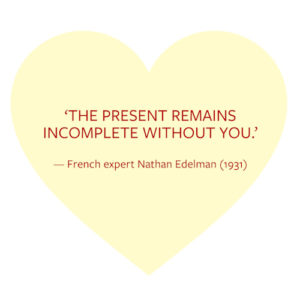 1. It’s always darkest before the dawn

“When I cast my eyes over the much-valued lines of your letters, I can almost imagine that Carrie is near me. I can hear her sweet and gentle voice. It leads me to ask myself how long will it be before I shall have the pleasure of seeing you. O, may the time be as fleeting as the tears of an infant.” — James J. Bxxxx, who signed his name like that, writing from Drayton, Georgia, on March 21, 1856 to a woman named Carrie.

“I am waiting for the day when you will be telling me that there is too much pepper and not enough salt.” — Eva Weintrobe to Morris Davis on March 3, 1938.

Weintrobe worked as a seamstress in Liverpool. The couple wrote back and forth for a year — breaking up once or twice over some hastily written letters — until Weintrobe left her family in England to marry Davis, an American in New York.

“I, who kept on telling you to think of the future whenever the loneliness of the present would sadden you, I feel depressed and disheartened a la folie. … Don’t scold me for it Lily — It is only a passing weakness, and will be short-lived. … [T]here is a balm for my ailment, and that is the very first of your cheering smiles,” wrote Nathan Edelman to future wife Lily Pokvidz on Sept. 7, 1931. Pokvidz, an author and educator, was born in San Francisco and lived in Petaluma during the couple’s courtship. Edelman was studying languages at the time and became an expert in French literature. They often worried that Edelman would be drafted to fight in World War II.

2. Dating without a cellphone could get a little ridiculous

In 1943, a young man named Robinson Jeffers often snuck into the bedroom of Connie Flavin Palms, in Carmel, California. Their secret meetings were arranged on scraps, folded into pieces no larger than a finger, and exchanged at various meeting points:

“I must see you — I must. Nothing can prevent us from having an hour together sometime. I was thinking — if I knew where your room is — I’d climb up and scratch on your window — some night at 3 a.m. — it would only take two hours to walk there — and you’d let me in — so beautiful but a dream. I love you forever. … 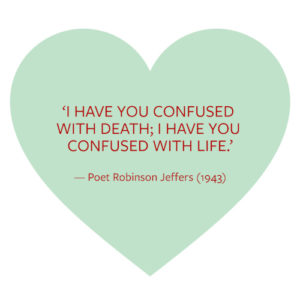 “I’ll never be whole till you return to me, I must have you at my side, with me, around me, in me … the present remains incomplete without you; music, which I adore, sounds flat … yes! even Gilbert and Sullivan! — sound frivolous.” — Nathan Edelman to Lily Pokvidz on Sept. 7, 1931.

“Darling, there is no one like you in all the world — every gesture beautiful, and every inflection of your voice and movement of your mind. I think of you every instant — really — day and night — don’t you feel it? It is very hard not to be able to see you, and hear you, and touch you. … The night is wild/With stars but ours/Has not risen yet/Some might it will/— sometime soon —/I hope I don’t go/Mad first.” — Robinson Jeffers to Connie Flavin Palms, 1943 (date unknown).

4. Letters were essential, and people got salty over delays

“What made you think I was sore with you about something? If it was because I did not answer sooner, I want you to know that I am not a person of leisure and have not much time for letter writing. … You asked me again why I do not write more sentimental and intimate letters. I am not a poet and cannot express my feelings in black and white and feel I will not be doing justice to my feelings.” — Eva Weintrobe to Morris Davis, April 10, 1936.

“When you will write, I shall feel once more in contact with you — but you must write me all your thoughts and share all your emotions with me; you must let your pen run as if your mind; free and open, were expressing itself without any restraint whatever; I wish to feel you through your letters, and by adoring the Lily I shall divine between the lines, I will find a year’s waiting more bearable.” — Nathan Edelman to Lily Pokvidz, Sept. 7, 1931.

“I’ve read and read your precious letter — it’s the strangest thing how the older we get, the harder I find our separation, no matter of how short duration. To bear, I clutch at every scrap of letter to shorten the gaps and narrow the distances.” — Lily Edelman to Nathan Edelman, Jan. 1, 1943.

“Dear Carrie, I anticipated an epistle from the last mail, but was sadly disappointed. You can not imagine my feelings when I called at the office. … No letter from Carrie, one that I love.” — James J. Bxxxx to Carrie, April 18, 1856.

5. If you liked it then you should’ve bought a house for it

“You don’t know how I long to see you to hold you in my arms and call you my own but I don’t know when that will be again. Money is what I want for I know I have got to have that before I can claim you. … I shall not come until I can offer you a home, and I presume you will be married before that time comes for it will be years before I can do that, and you will get tired of waiting.” — A man named Ralph, writing from Corning, California, to Myrtie on March 9, 1880.

6. Late night letter writing could get a little PG-13

“Never can I forget the ecstatic thrill of thy sweet kiss or the rapture of folding thy lovely form to my bosom.” — Gold miner Alfred to his fiancee, Orpha, on Aug. 7, 1851.

“Well dearest it is now ten o’clock and I must get my bath and get to bed, for tomorrow is another day. If my darling girl was with me tonight ten o clock would be quite early, even two o’clock in the morning was early sometimes.” — William H. Staniels Jr. writing to fiancee Marianna Monkhouse on Sept. 29, 1920. (The couple fell in love in Berkeley, spending most days in nature. They were engaged six weeks after meeting.)

“As much as I should like to travel the world over, like a master of the planet, I could forget that yearning, in your presence. With your hand in mine, and a deep, soulful kiss from you, and with you next to me everywhere, in everything, I would have the bliss of an eternity.” — Nathan Edelman to Lily (Pokvidz) Edelman, early to mid-1900s. 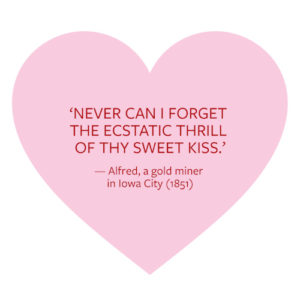 In 1851, a man named Alfred moved to Iowa City, California, to work in the mines during the height of the Gold Rush. Here’s an excerpt from a letter to his fiancee, Orpha, written Aug. 7, 1851:

“Amid all the disappointments and vexations of California life, I have still the same unimpeachable assurance that there is one that loves me. … And my greatest study now is to make myself worthy of that love. Come what may I hope at least to have an honest heart to give in return. …

“I wanted to send you enough to do your little fix me up, but expenses since I have been here have taken all the money I had so I can’t help it without borrowing, and that I dislike. … I must ever admire the expression of yours, about wealth, that the ‘wealth of a cottage is love.’ Well then, Dearest Orpha, we may be wealthy if I should make nothing by this long sojourn in California. But still I believe that I will make a few hundred dollars here. … [T]he boys all say that we will make from five hundred to two thousand here, but how little we know. …

“I believe this letter is the poorest one that I have written in California. My excuse is that I have worked very hard for five weeks past and now my hands are so badly bruised that I can’t hold a pen. But you know one thing, that it comes from one whose heart is yours until death.”