by Sonia Kahn from the Bancroft Digital Collections Unit.

From coast to coast, April 15, 1967, was a busy day for American anti-war protesters. Fifty years ago today, massive demonstrations filled the streets of New York and San Francisco as marchers denounced US involvement in Vietnam. 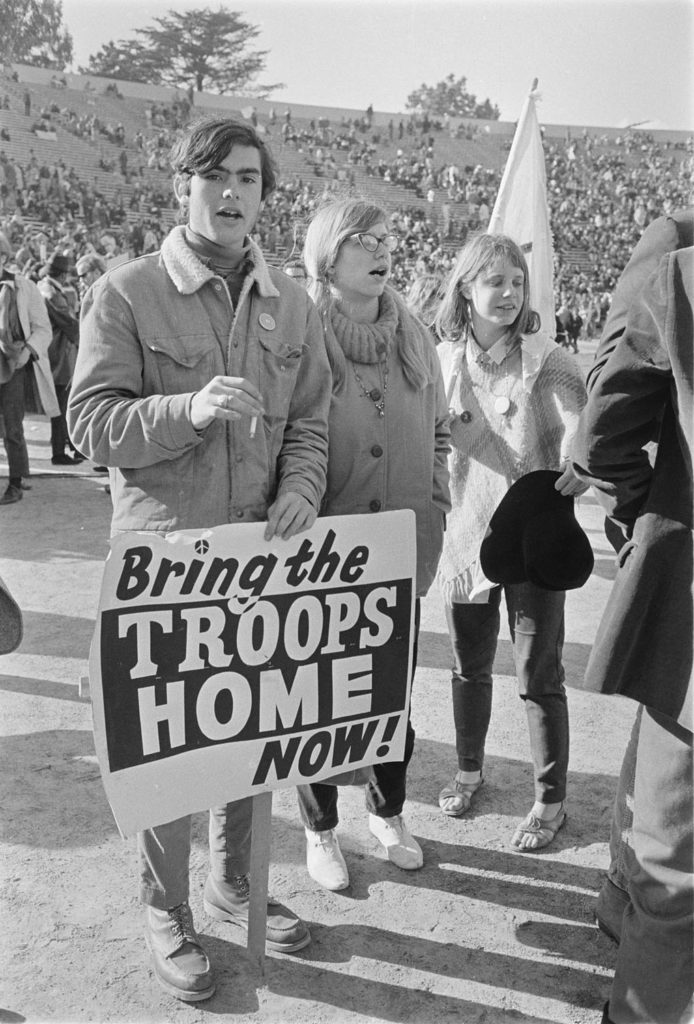 The protests were organized by the Spring Mobilization Committee to End the War in Vietnam, commonly referred to as “the Mobe,” which began in 1966 as a coalition of various groups opposed to the war. High profile names were among those who attended the marches, including Dr. Martin Luther King, who led the march in New York, and his wife Coretta King, who spoke to protesters at the counterpart demonstration in San Francisco. The Spring Mobilization protests were particularly noteworthy for the cooperation between civil rights and peace protesters in a greater effort to call for an end to the war.

The marches themselves were quite massive. In New York, upwards of 400,000 people joined the march which began in Central Park and was slated to end at the United Nations where speakers, including Dr. King, addressed the crowd. The demonstration in San Francisco, while smaller, still drew in between 75,000-100,000 protesters who walked from Second and Market Streets to Kezar Stadium in Golden Gate Park. There, demonstrators were similarly treated to speeches by Coretta King as well as actor Robert Vaughn.

In Central Park, before the East Coast march got underway, there was a mass burning of draft cards. Protesters claimed to have burned nearly 200 draft cards, although this number was never verified.

Though the protests were peaceful, there were a few notable skirmishes. In New York, some demonstrators were bombarded by eggs thrown out the windows of various apartments on Lexington Avenue. Others were struck by red paint launched outside of police barricades on the march route. In Times Square, fights also broke out between motorists stalled by heavy traffic and demonstrators taking part in the march.

In both cities, counter-demonstrators popped up to voice their support of the war. In New York, pro-war protesters carrying American flags and signs ran on the sidewalks beside the protesters and heckled them. In San Francisco, a group of about 50 war supporters brought up the rear of the march into Kezar Stadium, also carrying signs with slogans like “Support Our Men in Vietnam” and “Communism is Red Fascism.” The group circled the track amidst loud booing from the anti-war demonstrators until they were escorted out of the stadium.

Fifty years later America still prides itself on the First Amendment which protects our right to freely speak and assemble. This year has already proved a strong one for protest, making its mark with the Women’s March in January. The demonstration was a shot heard round the world, when half a million demonstrators marched on Washington, and another 100,000 filled the streets of Downtown Oakland. The size was roughly on par with the anti-war demonstrations of a half century ago. Considering our present day advancements with social media to help get the word out, this makes the numbers of those who showed up to voice their anti-war beliefs in 1967 all the more impressive. But despite the differences, what the similarities between these two huge movements prove is that the American tradition of protest is still vibrant, 50 years on.