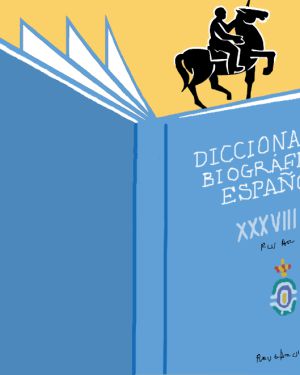 With the ease of Wikipedia, printed biographical reference works such as the new Diccionario Biografíco Español (DBE) once central to academic libraries appear to be losing their relevance, and shelf space. Judging by how few copies there are in U.S. libraries (seven at the moment according to WorldCat) this certainly seems to be the case with the DBE. It was first published in 2009 by Spain’s Real Academia de la Historia (RAH) with sponsorship of King Juan Carlos I and with support from the Ministry of Education, Culture, and Sports. Not actually for sale until 2011, Berkeley is currently the only library west of the Mississippi River with the first 25 volumes (up to the letter H) in its collection. Comparable to other ambitious national biographies like the Oxford Dictionary of National Biography (2004) and the Dizionario biografico degli Italiani – begun in 1960 and still not yet complete, the DBE will have more than 40,000 entries for individuals from all periods of Spanish history. The prologue states that the project was first conceived by the RAH between 1735 and 1738 to “reunir, en un Diccionario biografíco, a los ‘hombres de mérito’ de la distintas tierras de España.” An online database of those included as well as those who could potentially be added is available on the RAH web site.

The DBE differs from many national biographies in that it includes living people such as filmmaker Pedro Almodóvar, former Prime Minister José María Aznar, and even Emilío Botin who is the head of Banco Santander and largely financed the project through his charitable foundation. While the RAH has been criticized for under-representing women, there are detailed entries for leading Spanish feminists of the past such as Concepción Arenal and Clara Campoamor, cubist María Blanchard, and anarcho-syndicalist Teresa Claramunt. Catalan concrete poet and visual artist Joan Brossa even gets a multi-page entry. Coverage in the arena of literature is a bit thin and overlooks some major twentieth-century writers such as Lidia Falcón, Miguel Hernández, and Ramón Gómez de la Serna just to name a few. British author and literary critic Jeremy Treglown observes that “the contributors are the best that could have been found” and that “full coverage of figures from Spain’s long Islamic era is one of the dictionary’s triumphs.”

It is partially because of its selection criteria but more likely because of the sympathies of some of the contributors to the dictatorship of Francisco Franco that immediately sparked a national controversy. Public calls to revise many of the entries before the second tranche of volumes are printed has led to the RAH announcing that it will publish an addendum along with the forthcoming volumes. The most recent resolution to this dispute was announced in an article from El País last week titled “El Diccionario Biográfico Español, revisado una vez que se termine” and an eloquent review was published in the Times Literary Supplement last March titled “Franco’s Friends.” Treglown, who wrote the latter review, assesses this monumental work for what it is: “So it’s important to acknowledge, first, that the DBE is a very valuable resource, conservative in methodology but wide-ranging and undoctrinaire in its choices of both subjects and contributions, and ambitious in its associated aims.”

For a full account of El País‘ coverage of the controversies surrounding the DBE back to 1999, see: http://elpais.com/tag/diccionario_biografico_espanol.