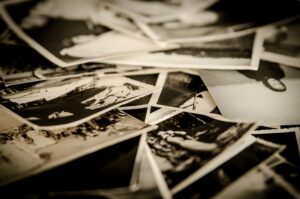 When people talk about becoming fast friends with someone, they often describe the experience as an easy ability to discuss anything, even the proverbial meaning of life. It’s a sign of a strong bond that you can feel vulnerable enough to share what you really think of life and how it has been lived.

What happens when it is your job to talk about the meaning of life with someone, to walk with them through the years as they take stock, evaluate failures and triumphs, and provide the odd piece of advice along the way? I would say that that is a pretty amazing job, and it is. But you also realize that one reason you are interviewing many of these folks is because they are nearing the end of their journeys. You become fast friends — one could say lifelong friends — and then, one day, they go away.

Interviewers have loss as their occupational hazard. Many of the narrators I speak with are in the late 80s, early 90s when I first sit down with them. Then it might be another twelve-to-eighteen months of interview sessions, breaks for illness and life events, reviews of transcripts, assembly of materials, publication, and even follow-up projects such as podcasts or additional interviews with others. Then – not always, but often – there are check-ins, updates, exchanges over a few years, often about more of the same: what things mean, what is important, the imperative of what we ought to do and the burden of what we often do instead. Of course, it’s important to realize that the temporary nature of our residence here is what gives life its eternal meaning. I watch people enact this understanding as they outline who they have been, who and what they have cared about, what they have witnessed, and what all this might mean for the future. But the fact is that the people I talk to become a part of me, and their departure takes my breath away, every time.

The consolation is that, if one has lived to the ninth decade, it is a kind of triumph to be celebrated and contemplated. I’m 52 years old. Although time is marching along, I am still usually at least a generation younger than the narrators I interview. Without getting analytical about it, there is just something elemental about an older and a younger person talking together. If, in general, our society suffers from too much talking and too little listening, it is especially true that we do not listen to older people often and carefully enough. An older person’s perspective is not just any perspective; it is the wisdom of a survivor. They have a visceral experience with life’s cycles and events of all kinds. Plugging into that way of knowing in these interviews is a gift. And while there is contemplation of the inevitable tragedies of life in these oral histories, and the eventual passing of these storytellers is sad, it is not usually tragic. So, accompanying a feeling of loss is a sense of gratitude and happiness that they lived a meaningful life with purpose and dignity.

I have been interviewing in earnest for about ten years, and my personal in memoriam list has increased with almost actuarial precision in 2020, 2021, and now this year.

In April, there was a memorial for economist George S. Tolley, with whom I spent a few weeks in Chicago in 2018, where I had a balcony view onto how sub-disciplines in economics developed around social and political problems: urban sprawl and housing costs, the pricing of environmental policies, economic development initiatives, and new ways of valuing health. He was 95.

In July, oral history impresario Tony Placzek passed away after spending the last four years of his life building two oral history projects, one about his dramatic family history and the other about underground political activism among physicists in Czechoslovakia. He was an inveterate optimist and a good friend. He was 83.

I first met Lester Telser at an event at which Nobel-Prize-winning economists fawned over his mathematical prowess in the jovial “taught me everything I know” manner of close mentees. He had little patience for dogma of any kind and was remarkably kind and generous of spirit. Talking with Lester was a master class in the importance of appropriate expertise and good judgment in the face of enormously complicated societal problems. As late as this summer, Lester and I were swapping tips on good papers and the hidden heroes of baroque chamber music. He died in September. He was 91.

I only met Thaddeus “Ted” Massalski briefly at a conference at Disneyworld, of all places. He talked about his incredible career as a professor of metallurgy and materials science, his key scientific discoveries and his experiences as both a refugee and a soldier during World War II. Here Professor Massalski tells the story of a narrow escape from the Nazis during World War II. He was 96.

Although I did not interview the following personally, we have lost some important friends to the Oral History Center this year: narrators and supporters Richard “Dick” Blum and Howard Friesen. Mr. Blum was a financier, former Regent of the University of California, and supporter of many causes. The Carmel and Howard Friesen Prize in Oral History Research is awarded to an undergraduate whose outstanding paper utilizes the OHC collection. From our Regional Oral History Office community (renamed the OHC in 2015), we also lost interviewer, US political historian, and composer Julie Shearer.

For many people, the holidays can be hard for a number of reasons. One reason may be that they are a time of reflection and meaning-making, maybe a little bit like undertaking an oral history. Fortunately for me, mine involve bittersweet emotions this year. I feel lucky to have known the people who passed this year and sorry to have missed knowing the others. So, this season, I wish you peace with the difficult memories and joy with the creation of new ones with family, friends, and even the fast friends and acquaintances you have just met.