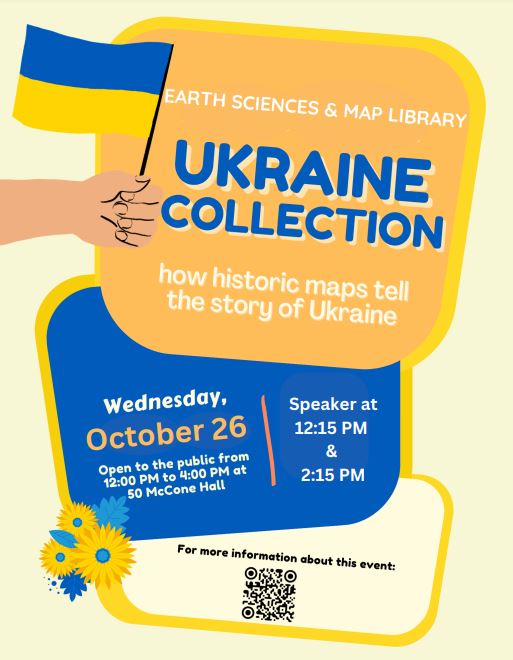 Please join us for a Maps & More program at the Earth Sciences and Map Library in McCone Hall, located near North Gate on the UC Berkeley campus, on Wednesday, October 26th.

Professor John Connelly (Director, Institute of Slavic, East European, and Eurasian Studies) will introduce a temporary exhibit of historic maps of Ukraine with brief remarks at 12:15 PM and 2:15 PM. Dr. Connelly, a specialist in East European history, currently teaches a course “Ukraine and Its Neighbors.”

Highlights from the library’s collection of Ukrainian, Central European and East European maps and atlases will be on display throughout the afternoon, from noon to 4 PM.

European Renaissance cartographers treated Ukraine as a peripheral place. That changed in the 17th century, in part due to work done by Guillaume le Vasseur de Beauplan (1600-1673), a French military engineer and cartographer, who served for two decades in the army of the Polish-Lithuanian Commonwealth, starting in 1630.

Beauplan was initially charged with identifying suitable sites for the construction of fortifications in Ukraine. Later he planned settlements, and built or enlarged fortresses. Beginning in 1648, Beauplan turned his attention to the map trade. He published a general map of Ukraine, followed by a special map of the same area on eight sheets, engraved in the workshop of the Dutch cartographer and map publisher Jodocus Hondius. 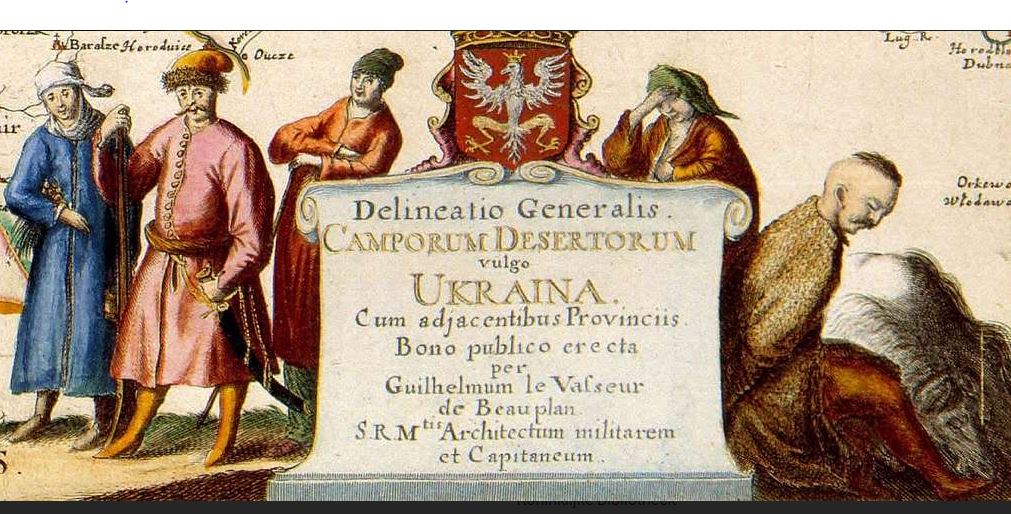 A decorative cartouche, from the map General Depiction of the Deserted Plains, Commonly Identified as Ukraine, Together with its Neighboring Provinces (Gdansk, Poland, 1648), drawn by Beauplan, who had crisscrossed the territory of the Polish-Lithuanian Commonwealth and the lands of the Cossack Hetmanate on military campaigns against Cossacks and Crimean Tatars and travelled throughout much of what today constitutes Ukraine.

In 1660, a Beauplan map published in Rouen, France, by Jacques Cailloue, the Carte d’Ukranie, contenant plusieurs provinces comprises entre les confins de Moscovie et les limittes de Transilvanie, boldly demarcated the boundaries of Ukraine. That same year Cailloue also published a second, enlarged edition of Beauplan’s popular book Description d’Ukranie (Rouen, 1660). A third edition followed in 1661.  In his writings and on his maps Beauplan carefully noted the geographical naming practices of the indigenous inhabitants which he encountered in these borderland areas. His decision to identify the vast region located between Transylvania and Muscovy as Ukraine reflects 17th century Cossack usage. 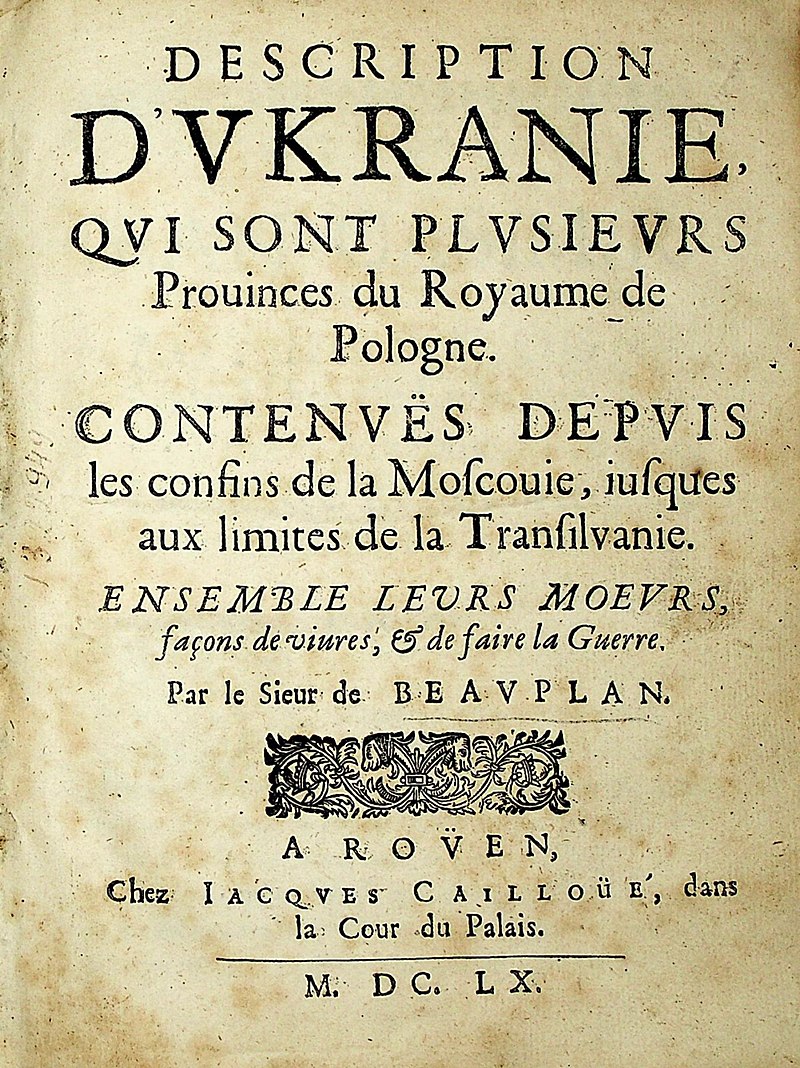 Maps that Beauplan produced were subsequently incorporated in Johannes Blaeu’s Atlas major (1659-72) and appeared in the 1680s in influential atlases published by Johannes Janssonius and Moses Pitt. Other cartographers now treated Beauplan’s work in Eastern Europe as authoritative and continued to see Ukraine as “Land of the Cossacks.” For the next century and a half other cartographers faithfully reproduced Beauplan’s maps in atlas compilations. Beauplan thus played a crucial role in helping to codify the usage of the geographical name “Ukraine” for a large defined territory.

Most of the maps and atlases in the collections of the Earth Sciences and Map Library cover Ukraine and associated larger frames of geographical reference, like the Black Sea region, Central Europe, or Eastern Europe in the late 19th and 20th centuries. Some were produced by the murderous regimes which sought to dominate Ukraine and its neighbors. 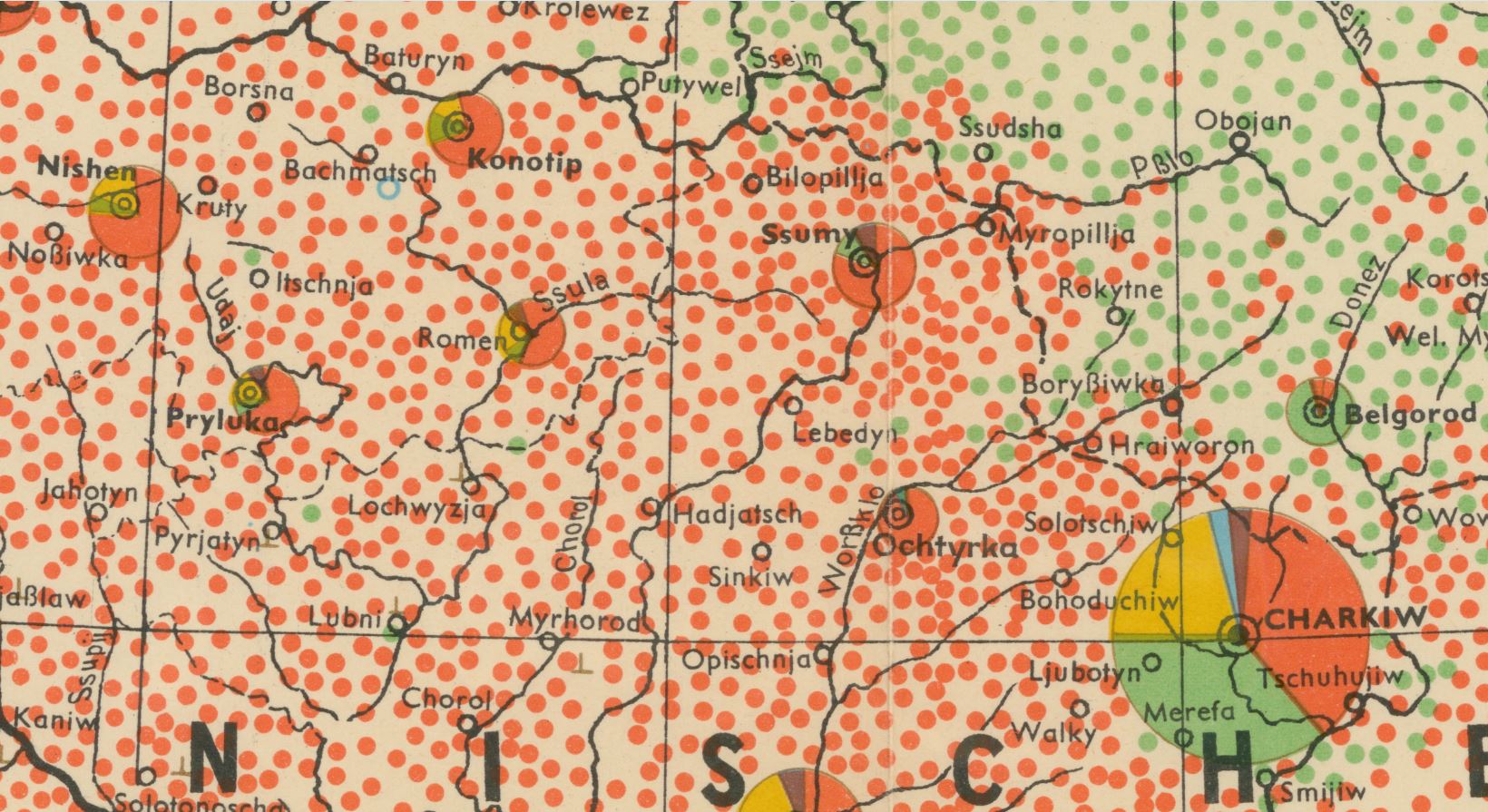 The Kharkiv region, detail from an ethnographic map of the Ukrainian S.S.R. based on the 1926 census of the Soviet Union. That census took place when Ukrainians were still free to express ethnic preferences, before the Stalinist repression, the Holodomor (the Terror-Famine of 1932-1933), and before Nazi Germany invaded the area and murdered millions of Ukrainians during World War II. In 1926, the countryside appears solidly Ukrainian. Most cities have sizable Jewish communities, in particular Kharkiv. Image source: Nationalitätenkarte der Ukraine (Berlin, 1943), from Atlas der Ukraine and benachbarten Gebiete, a loose-leaf atlas published by a Nazi Ostforschung Institute. Digitized by the UC Berkeley Library, as part of its ongoing German World War II Captured Maps digitial humanities project.

And finally, one of the most visually stunning maps in the collections of the Earth Sciences & Map Library:

Detail from Sergei V. Pozniak’s pictorial map The Kiev-Pechersk Lavra (Kyiv, 1994), a perspective view of Kyiv-Pechers’k Dormition Lavra, also known as the Kyiv Monastery of the Caves, founded in 1051, a preeminent center of Eastern Orthodox Christianity. 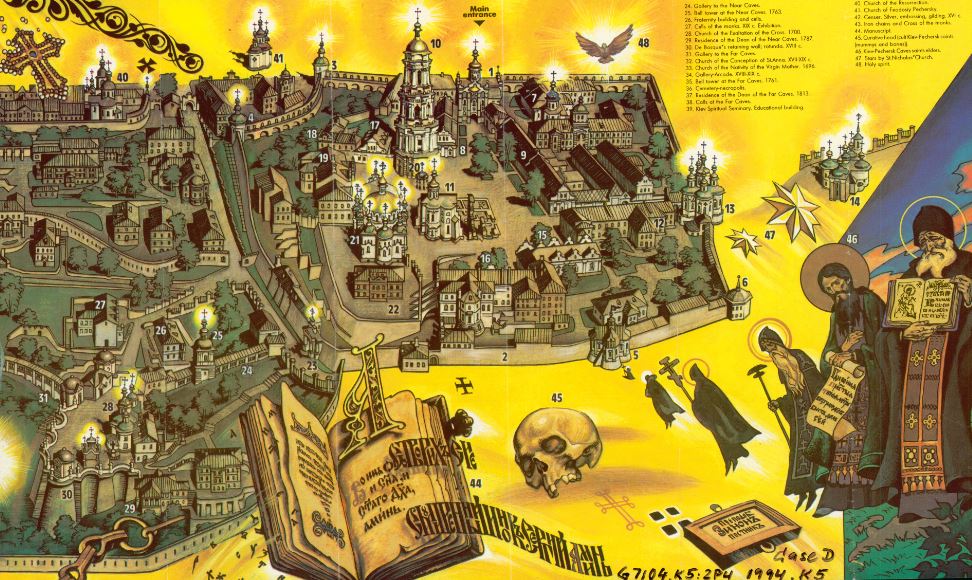 This event marks a return of the Earth Science & Map Library’s Maps and More Pop Up Exhibit Series.

Open to all audiences.