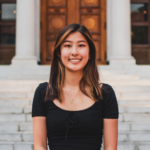 I’m Alysa, one of the fellows that was on the Making Team working on increasing the accessibility of the Makerspace to more students at Berkeley. We wanted to focus specifically on people who identified as students of color, junior transfers, and nontraditional college students. Our deliverable for the end of the semester was a workshop held at the Doe Makerspace in which we brought students from these backgrounds here and taught them how to use some of the tools to customize their own tote bag. Additionally, we collected some key insights through a survey on how this workshop could inform future Makerspace outreach and workshop initiatives that are more accessible for students.

So, how did we get to our final deliverable in the first place? In the beginning of fall semester, my team and I, Maura, Christina and Chloe, first got together to do some user research. We wanted to see how people behaved organically in the Makerspace so we staked out at the first floor of Moffit and, through our observations, noticed that the women and students of color in general felt less comfortable in the space than other students. This informed our problem scope stated earlier: How might we increase the access to the Makerspace for students in marginalized communities?

In preparation for our event, which was going to be held in the newly relocated Doe Makerspace, I created a flyer to spread the word about it. Christina then made sure that it got to our target audiences by asking the Multicultural Community Center, Transfer Student Center, Disabled Students Program, and other similar organizations to include our event in their weekly newsletters. Our marketing brought in over 50 registrations which we were really excited about, but now we faced the problem of how to manage so many participants in the Makerspace at the same time.

During the few minutes before the actual event, we set up stations that featured a specific tool in the Makerspace that they can use to customize their tote bag. All of us were either responsible for a station or worked on gathering survey responses. I personally helped people heat press vinyl-cut designs onto their tote bags. It was really rewarding getting to speak with actual students that were both interested and amazed by the Makerspace since it was completely free and open for any student to use. A lot of them wanted to come back again for future personal projects such as mending clothes, or 3D printing Cal memorabilia.

Through the survey, I saw our qualitative observations become actualized into quantitative observations: over 75% of the people who came to the Makerspace that day had no idea it even existed, while the other 25% had only heard of it before, and everyone said that they would want to come back to keep exploring its services. We also gathered insight as to what times people would be most available to come to workshops, and learned a little bit about people’s general schedules.

In the future, I think the Makerspace can definitely draw from the techniques we used to spread the word about this event to increase campus-wide awareness. I see this as an experiment that played with how we normally hold and spread the word about events at the Makerspace. I also see it as just the beginning of innovating and ideating on what being in the Makerspace at Berkeley will look like in the future. I’m very excited to delve deeper into how we might hold similar events like this to keep bringing new members into our community of Makers.