There has long been a tendency to describe democratic institutions as industrial machines: Congress as the engine of democracy; American industry, military power, or institutions associated with international development as the arsenal of democracy; California’s Master Plan for higher education as a democratic conveyor belt of educational opportunity; and even UC Berkeley student activist Mario Savio’s call to lay down protestors’ bodies upon the gears of the machine of the university. In our newsletter this month, we are exploring how human beings have engaged with the problem of democracy as mechanism. 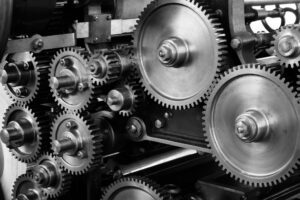 Todd Holmes’ new, massive project on the history of Chicana/o Studies features the voices of scholars and activists who helped redefine the university as a democratic institution: the student body, the composition of the faculty, the nature and function of the university, and even what counts as formal academic knowledge and practice. He writes of the Chicana/o movement’s own “El Plan” to answer UC President Clark Kerr’s Master Plan for higher education and their efforts to make a more human, representative, and just university.

For the Getty Trust’s African American Art History Initiative, Amanda Tewes interviewed artist and educator Richard Mayhew, who spoke of his experience with the founding of Spiral in the 1960s, an African American artists organization in which members explored connections between their art and the Civil Rights movement of the time. She also interviewed Merritt Price, longtime head of the Design Department for the Getty Trust. Tapping into her public history expertise, Tewes explores the construction and redesign of the Getty Center and the Getty Villa around the experience and needs of the visiting public.

UC Berkeley undergraduate Shannon White taps into our current anxieties about nuclear escalation (speaking of institutions as mechanism) by exploring oral histories that deal with the plans and negotiations around nuclear disarmament during the Cold War. In this case, too, though we are accustomed to thinking about nuclear strategy in mechanical, theoretical terms, we learn how individuals and groups struggled with the threat of annihilation in human terms.

Ultimately, we can see that the mechanical metaphor for democracy itself functions poorly. Mechanism connotes automation, strict, narrow paths of navigation, and the regulated transfer of effort. Democratic institutions function to the extent that they do by being open, porous, flexible, accretive, experimental, and planned to maximize the spontaneity and chance discoveries of their participants.

In partial service to this end, the Oral History Center is hosting the symposium “Assessing the Role of Race and Power in Oral History Theory and Practice” on Zoom from June 27–29, 2022.  This follows the efforts of a number of members of the oral history community to think through challenges of inclusion and justice in our work.

Finally, enrollment in our Oral History Summer Institute for August 2022 is full and closed, though we look forward to offering more educational offerings in 2023!

Sign up for our monthly newsletter featuring think pieces, new releases, podcasts, Q&As, and everything oral history. Access this month’s articles from our home page.