“If you’ve ever thought to yourself, ‘What the hell was Willie thinking?’ … well, now you have the chance to hear for yourself!” — Mayor Willie Brown on his oral history

About the Willie Brown Oral Histories

Willie Brown was the 41st Mayor San Francisco, serving two terms between 1996 and 2004. Prior to that, Brown represented San Francisco in the California State Assembly for thirty years, serving as that body’s Speaker for a record fifteen years. During his four-decade political career, Brown was admired and despised, respected and feared by politicos statewide. His passion for politics and exuberant style of leadership attracted the attention of leaders and influencers nationwide.

Together, two oral history interviews from the UC Berkeley Oral History Center form a remarkable life story that began in the segregated town of Mineola, Texas, in 1934, and run through four decades in politics, law, and policy up to 2016, on the verge of that surprising presidential election. Find these and all our oral histories from the search feature on our home page. You can search by name, key word, and several other criteria.

Interviewer Martin Meeker comments on Brown’s importance to San Francisco and California politics, the significance of the oral history as a draft of the city’s history at the turn of the millennium, and what it was like to interview the legendary mayor. “At times deeply thoughtful and soft-spoken while at other times exuberant and laughing boisterously, Brown brought all his passion, intelligence, and personality to bear on the telling of this story.” Martin Meeker Commentary

“His Williness” at Beach Blanket Babylon 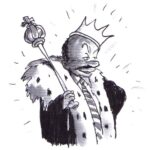 San Francisco Chronicle political cartoonist Phil Frank repeatedly lampooned Mayor Brown, drawing him as a king; Willie Brown played the caricature in Beach Blanket Babylon, San Francisco’s iconic musical revue. Hear Willie Brown talk about handling criticism and the importance of laughter. “I enjoy any form of humor, whether it’s about me, against me, or with me. I really love to laugh.” (p. 145–146)

Photo: “His Williness” as drawn by cartoonist Paul Frank, from the Phil Frank Archive of Comic Strips, The Bancroft Library (Banc pic 2012.032).

Foreword to the Oral History By Mike Roos

Find out why Mike Roos, Member of California State Assembly, 1977–1991, found Willie Brown to be passionate, spellbinding, authentic, and brilliant — and “the most effective state leader in the later part of the twentieth century in the most influential state in the United States.” Mike Roos on Willie Brown

The 10-hour history begins with the remarkable tale of how Democrat stalwart Brown managed to get re-elected Assembly Speaker in 1995, even after Republicans won a majority in the state Assembly. Facing the prospect of terming out of office, Brown then set his sights on running for San Francisco mayor. The new oral history then delves into his successful campaigns for mayor in 1995 and 1999; Brown’s first term agenda, including tackling economic development, homelessness, housing, and the development of an entire new neighborhood, Mission Bay, now home to the University of California San Francisco, the San Francisco Giants and the Golden State Warriors; and his appointments to the Board of Supervisors. The history moves on to his second term agenda, including replacing the Transbay Terminal; the city’s housing crisis; so-called  “Progressives” in San Francisco politics; and his own reflections on his image and legacy.

The Willie Brown: Mayor of San Francisco, 1996–2004 oral history was sponsored by the University of California, Office of the President, under the leadership of then-President Janet Napolitano.

Spanning nearly fourteen hours, Willie Brown’s first interview with the Oral History Center documents the events of his life preceding his election as mayor of San Francisco. Brown begins with his experience growing up in the segregated town of Mineola, Texas, where he was born in 1934. He then describes what is perhaps the major physical turning point in his life: the move from Texas to San Francisco, where he would eventually rise to unprecedented political and cultural influence. His story in the city begins in 1951 with his years at San Francisco State University, where he first became involved with Democratic politics. He also describes his time at UC Hastings School of Law and his resulting law practice of the late 1950s and early 1960s, during which he continued his involvement in politics. The oral history goes on to explore his journey to the California State Assembly and expands on his career and contributions as a member of the legislative body. He then describes how he became speaker of the assembly and the issues he faced in the position, including government organization, revenue and taxation, African American equity, and challenges within the Democratic Party. Finally, he recounts his experience as chairman of Jesse Jackson’s 1988 campaign, the major issues facing California in the early 1990s, including welfare, workers’ compensation, and health care in California during the early 1990s, and the dangers of term limits.

Written excerpts from the Willie Brown oral history transcript on topics and people including:

How to Request Audio

To request audio from anywhere in the transcript, please send an email to BerkeleyOHC@berkeley.edu. Be sure to include beginning and ending time stamps.