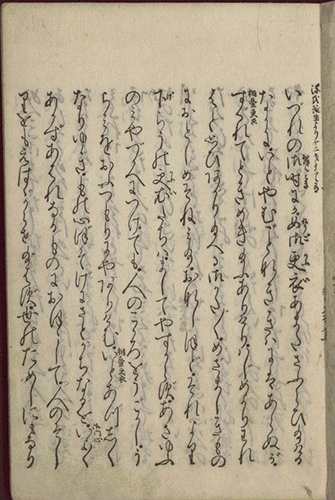 O seer who roams the vastness of the heavens, go and find for me a soul
I now seek in vain even when I chance to dream. (trans.  Royall Tyler)

Genji monogatari, or the Tale of Genji, is generally considered as the supreme masterpiece of Japanese prose literature. Written in the early 11th century by a court lady Murasaki Shikibu, it is often called the world’s earliest novel. Although a holograph manuscript is not extant, it is known that this literary work, approximately the length of the present Genji of over 50 chapters, had been completed by 1008 and widely circulated by 1021. The work recounts the life of Hikaru Genji, or “Shining Genji,” the son of an ancient Japanese emperor Kiritsubo and a low-ranking but beloved concubine Lady Kiritsubo, with a particular focus on Genji’s romantic life with various women and the customs of the aristocratic society of the time. The Tale of Genji has been extremely influential on later literature and other art forms, including painting, Nō drama, kabuki theater, cinema, television, and even manga.

Helen McCullough (1918-1998) who studied and taught Japanese literature at UC Berkeley for many years explained, “the Tale of Genji transcends both its genre and age. Its basic subject matter and setting—love at the Heian court—are those of the romance, and its cultural assumptions are those of the mid-Heian period, but Murasaki Shikibu’s unique genius has made the work for many a powerful statement of human relationships, the impossibility of permanent happiness in love, the ineluctability of karmic retribution, and the vital importance, in a world of sorrows, of sensitivity to the feelings of others.”[1] Indeed this literary text has been studied by scholars for many centuries. In the Edo period (1603-1868), various printed editions of the Tale of Genji as well as numerous annotations and criticisms came to be published. It is said that 150 to 200 research articles and books on the Tale of Genji are published in Japan every year.[2] The Tale of Genji has been translated in many languages, including six major translations into English.

In 1900 Japanese instruction as foreign language began at UC Berkeley as the first institution to offer such academic program in the U. S.[3] Today the Department of East Asian Languages & Cultures offers the first through fifth year level courses and a specialized course for heritage students. Japanese is the national language of Japan with population of 126 million people. According to the Survey on Japanese-Language Education Abroad conducted by the Japan Foundation,more than 3.9 million people were studying Japanese language at 16,000 institutions worldwide in 2012.[4]