Captured in part through the Oral History Center’s interview of Sickler, the labor activist’s winning personality and creative intelligence is evident throughout all the essays.

At 19 David Sickler, with ambitions to run his own horse ranch, went to work for Coors Brewing Company. It was the best-paying job he could find in his hometown of Golden, Colorado. But the working conditions there were so deplorable, the control William and Joseph Coors had over the lives of their workers so complete—and as Dave would learn over the government of Colorado and some of the most powerful right-wing institutions in the nation—that David committed himself to the labor movement, first as a union shop steward and then as head of the Brewery Workers Local 336. He led a strike against Coors in l977 and organized a national boycott of the beer that lasted ten years. This catapulted him into the leadership of the AFL-CIO and some of the most critical labor struggles from the l970s through his retirement in 2015. 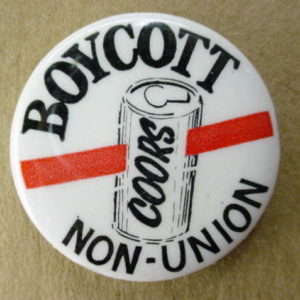 Newly published by UCLA’s Center for Labor Research and Education, From Coors to California: David Sickler and The New Working Class is a collection of six essays written by scholars and labor activists that focus on key industries and constituencies Sickler targeted and the strategies he employed during his nearly fifty year career as a labor organizer and leader. The book is based substantially on an oral history that I conducted for the Oral History Center in 2014: David Sickler: A Lifetime as Labor Organizer, AFL-CIO Leader and Champion of Immigrant Workers.

An essay on the Coors strike discusses how Sickler became close friends with the San Francisco gay-rights activist Howard Wallace, having determined that gay bars in the City—and Latinx communities in Los Angeles—had the highest consumption of Coors beer in the country. They were able to stop the sale of Coors in most bars and kept distributors from handling Coors—a strategy replicated throughout the country.  Another essay on immigrant worker organizing shows how Sickler brought those who most trade unions considered threats to their movement, and who had been excluded, into unions and ultimately into the political mainstream of California. This took a lot of commitment, courage, and finesse. A new generation of Latinx leaders emerged from campaigns against California’s rabid anti-immigrant and labor Propositions l87 and 226. When longtime labor activist and California state assemblyman Antonio Villaraigosa was elected mayor of Los Angeles in 2005—the first Latino mayor—he appointed Sickler as his senior labor advisor and commissioner for the powerful public works department. Other essays examine the role Sickler played coordinating political strategies of various unions and establishing labor think tanks and educational programs.

Sickler’s winning personality and creative intelligence is evident throughout all the essays. The book will serve as a case study for labor organizing: already at book parties held at several labor centers around the country, a separate session has been convened for union representatives. There is also a useful bibliography and photographs that chronicle the narratives. As William Coors often repeated, one of the biggest mistakes he made was hiring David Sickler. As the oral history and this new book demonstrate, David Sickler was the better for it and so has been the history of the labor movement and social justice.