This is the first entry in an occasional series (perhaps very occasional) of articles describing Bancroft Library materials that have recently been made available for research.

Playing cards can be used for many purposes other than recreation. Three decks of playing cards designed for a very specific purpose–to further the education of a young monarch–have been cataloged at The Bancroft Library.

One of Cardinal Mazarin’s duties was to supervise the education of the young king. To that end, he commissioned Jean Desmarets de Saint-Sorlin (1595-1676), a member of the Académie Française, to devise a series of card games, which were in vogue at court, to interest Louis in his studies. The series comprises four sets of educational cards, each bearing a full-length figure, designed and engraved by the noted Florentine engraver Stefano della Bella (1610-1664), with descriptive text and a number. In 1644, Desmarets de Saint-Sorlin published an explanation of them with the title Les jeux de cartes, des roys de France, des reines renommées, de la géographie, et des fables, cy devant dediez à la reine régente, pour l’instruction du roi (“The Card Decks [or Sets] of the Kings of France, Renowned Queens, Geography, and Fables, Previously Dedicated to the Queen Regent, for the Instruction of the King.”)

Bancroft holds three of the four sets of cards. The Cartes des rois de France (“Cards of the Kings of France”) set contains 39 biographical cards, beginning with Pharamond and ending with young Louis himself, who is depicted as a boy riding in a triumphal chariot with his mother, Anne, holding the reins. The descriptive texts recount the territorial gains and losses, marriage alliances, royal character, and political and military adventures of the kings of France. Jeu des reynes renommées (“Deck [or Set] of Renowned Queens”) has 52 biographical cards ranging from Martesie, Queen of the Amazons, to Anne of Austria. The set comprises four series of 13 cards each, with descriptive legends and a single descriptive adjective (pious, clever, cruel, saintly, wise, brave, etc.) at one of the upper corners. Jeu de la géographie (“Deck [or Set] of Geography”) also has 52 cards, with figures emblematic of the country and text recording the nation’s size, borders, natural resources, principal cities, etc. Thirteen of the cards relate to America. 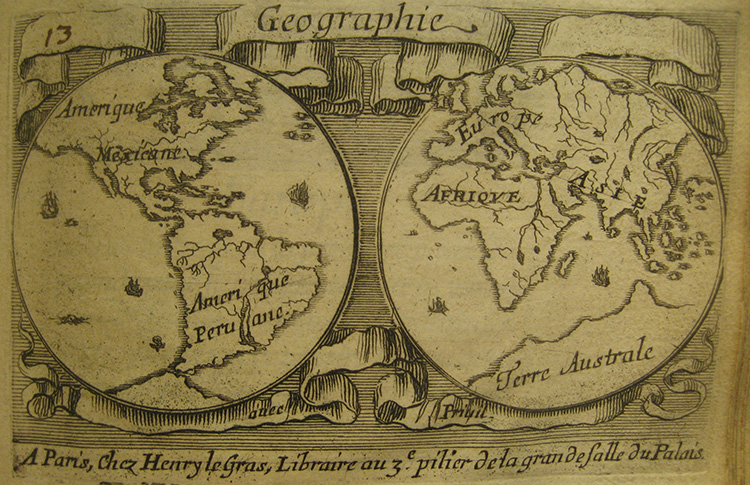 The cards are known to exist in four states, with later versions having numbers and suits added, and some of the images modified or replaced (for example, the image of the young Louis XIV was later substituted with a depiction of a statue of the king as a grown man). Bancroft’s sets, which were purchased in 2013, are all in the second state. Each card has been cut out and mounted on a separate leaf. The three sets are bound together as a single volume in a contemporary vellum binding. These cards, which were later reprinted twice, first in 1664 and again in 1698, are well-known in the literature documenting the history of playing cards. However, very few examples survive in libraries. With three complete sets, Bancroft’s volume represents one of the most comprehensive collections available for research.