We recently caught up with Kelly Navies, who joined us in 2013 for our Summer Institute. She is now the Museum Specialist in Oral History at the Smithsonian National Museum of African American History and Culture, where she coordinates their Oral History program. We talked to her about how she came to oral history, what she learned at the Institute, and her current work with the Smithsonian. 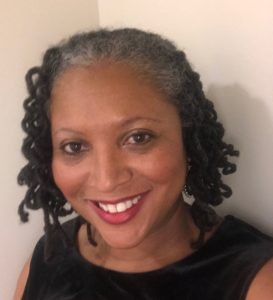 Q: How did you first come to oral history?

A: I first came to oral history, while I was an undergraduate at UC Berkeley in the African American Studies Department back in the early 1990s. In the Fall semester of my senior year, I took two courses which had a profound impact on my life; African American Poetry with the late June Jordan, and Images of Black Women in Literature with the late Barbara Christian. Prof. Christian assigned an optional paper to write about a maternal ancestor who’d lived during the 19th century. At the same time, June ( she preferred to be called, June), assigned a poem about mothers. Receiving these two assignments at the same time, inspired me to decide to pursue a research project on a maternal ancestor my mother had been telling me about all my life, but whom she actually knew very little about. All she knew was that she had been enslaved in Asheville, NC and had lived over 100 years into the 1950s, when my youthful mother had actually met her. At the time, all 6 of my grandmother’s siblings were still living ( she was deceased), so I embarked upon an oral history project to interview them all about their grandmother. Through a combination of genealogical research and oral history interviews, I eventually learned that she was named, Elizabeth Gudger Stevens, had indeed been born into slavery in Asheville, NC and had lived until 1956, when she was either 102 or 106, depending on who you believe ( no birth records, of course). It must be added that the only reason I knew “oral history” was a thing at all was because of a 7th grade English assignment and being introduced to Zora Neale Hurston at an early age.

Q: You attended the Advanced Oral History Summer Institute in 2013. What project were working on?

A: When I came to the Advanced Oral History Summer Institute in 2013, I was working as a Special Collections Librarian and Oral Historian for the Washington DC Public Library System. I had received an MLIS grant to pursue the “U Street Oral History Project.” The U Street corridor was the thriving heart of the African American business and cultural community in Washington, DC up until 1968, when many of the businesses were destroyed during the urban upheaval that followed the assassination of Dr. King. In fact, it remained a central location for Black life in Washington, DC up until the recent demographic transformation that has marked the city. For this project, I conducted over a dozen audio interviews that are now available from the DC Public library website:  (dclibrary.org) Three audio clips from this project have been made into podcasts that are also available from the DC Public Library website. I also held a public program at the Busboys and Poets restaurant on 14th St., right off of the historic U Street corridor, where I invited interviewees to participate. Finally, I shared the research project on a radio program at WPFW.

Q: How did your work benefit from the Summer Institute?

A: The Summer Institute introduced me to the work of other oral historians from around the world working in a variety of disciplines from academia to independent scholars and artists. I have kept in touch with several, in fact. It also brought me up to speed on the technological and theoretical state of the field.  Finally, I really enjoyed learning about Robin Nagle’s oral history work with sanitation workers.

Q: You now work with the Smithsonian. What’s the role of oral history at the museum?

A: As Museum Specialist in Oral History here at the Smithsonian National Museum of African American History and Culture (NMAAHC), I coordinate the oral history program, which involves planning, budgeting, developing projects in collaboration with curators, and yes, interviewing. All of our interviews are filmed. However, I don’t conduct all of the interviews- in some cases, I conduct the research, help develop the questions, and handle the logistics. I also do trainings for classes and community groups.

Q: How do you get the public to engage with oral history?

A: Our oral history collection is cataloged along with other artifacts and are available for use in exhibitions for as long as we preserve them. Most recently, we conducted interviews for the Poor People’s Campaign Exhibition, City of Hope, and clips from those interviews were included in the exhibition. Visitors to the museum will also find oral history interviews located throughout the museum. For example, in our community galleries on the third floor, there is a clip of an interview I conducted with Mr. Frank Wright about his family’s generational involvement in oyster fishing on the Eastern Shore of Maryland. The oral history program also includes thousands of recordings captured in our Reflections Booths which are located in the history galleries. Here, visitors choose a question and record their answers in two minutes or less on a built-in camera. They then can choose to email it to themselves and/or share it with us.

Q: What do you hope the public takes away from the oral histories in the Smithsonian’s collection?

A: When visitors encounter oral history in the museum, I hope they understand that history is a living breathing thing and not just something you read about in books. I hope it increases their awareness and interest in the stories of their elders and others around them.

Q: What kind of projects do you draw inspiration from?

A: I find all of my projects/interviews inspirational. The oral histories of African Americans reveal deep truths about America and about the human condition, overall. Each story I capture reminds me that there are so many other stories. oral history is a passion that is endlessly gratifying. Most recently, I had an experience that speaks to the significance of recording these stories. I interviewed a woman who knew that she wouldn’t be with us much longer-a black woman who had accomplished much in her life, and yet was still worried that her work might be forgotten-her narrative was profound and reflective. She passed away not long after and her family asked me to share some of what I had learned about her life at the memorial service. I truly consider the work we do, as oral historians, to be a sacred honor. We facilitate and capture heroic stories of ordinary individuals that are often relegated to the margins.