As interviewed by Todd Holmes 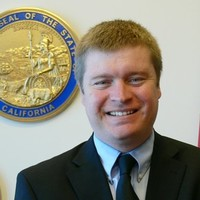 Alex Vassar attend our Advanced Oral History Summer Institute in 2017. A seasoned civil servant, Alex is no stranger to the circles of California government. In 2007, he served as a Senate Fellow in the state’s upper house, and worked thereafter in both houses before transferring to other departments of state government. Currently, he is the Communications Manager of the California State Library. When he joined us last summer, he had just finished an oral history of former State Senator Denise Ducheny on behalf of the State Archives. This interview was part of a collaborative effort between the State Archives, State Library, Sacramento State, and UC Berkeley’s Oral History Center to revamp the California State Government Oral History Program. That long effort ultimately proved successful, as the program was refunded in the 2018-19 state budget. We caught up with Alex this past month at his office in Sacramento to this victory and see what else he’s been up to since last summer.

Q: Tell us a little bit about your work and how you use oral history.

Vassar: I have always been interested in the political process and how the experiences of the people who run for office impact their thinking and decisions. That was a large part of why I moved to Sacramento in 2007 to participate in the Senate Fellows Program at Sacramento State. In the years since, I have conducted a number of short interviews with current and former state legislators. These interviews formed the crux of my recent book, California Lawmaker: The Men and Women of the California Legislature.

In 2016, I had the opportunity to sit down with former State Senator Denise Moreno Ducheny for a 14-hour interview. This was part of the State Government Oral History Program, housed at the California State Archives since the 1980s. I loved the long format of the oral history interview, spaced between multiple sessions, and how it allowed the interviewee to tell stories and take the time to explore memories.

Q: How did the Summer Institute shape your work?

Vassar: In 2017, I accepted a new role at the California State Library, heading up the Communications Division. Almost immediately after starting the new job, I had the opportunity to participate in the Oral History Center’s Advanced Summer Institute, thanks to the support of State Librarian Greg Lucas. It was an amazing experience and I loved the speakers, my classmates, and the campus. (My mother was working on a Ph.D. at Cal when I was born, but I had never spent more than a few hours on campus.) The Summer Institute gave me new insight into the practice of oral history, knowledge I’m hoping to bring to new interviews in the future, and more importantly, to the oral history-based initiatives we have created at the State Library.

Q: Tell us about these initiatives and what’s next on the horizon for your work in oral history?

Vassar: Recently, I’ve worked with State Librarian Greg Lucas and State Archivist Nancy Lenoil, as well as institutional partners such as the UC Berkeley’s Oral History Center and the Center for California Studies at Sacramento State, to restart the State Government Oral History Program. Created in the 1980s, the program had conducted hundreds of oral history interviews with former lawmakers and civil servants before funding was cut in 2003. My interview with Senator Ducheny was one of the few interviews conducted in recent years, thanks to the Center for California Studies at Sacramento State. I’m happy to report, however, that the efforts of the OHC and Sacramento State proved successful, with refunding of the State Government Oral History Program in the 2018-19 California budget. In addition to this program, we are also currently meeting with academic institutions to establish resources for oral historians to use and share at the State Library.