Sauntering in the Sierra 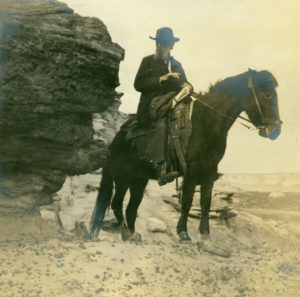 Deep into Sequoia National Park, a thin, wiry rider climbed a mountain trail atop a dusty white horse. He wore a dark business suit, per his backcountry custom, and from under his black felt hat, a bushy white beard spilled forth. Up the Kern River Canyon, a group of young Sierra Club members trekked through the high country.  As the rider approached them, his piercing blue eyes surveyed the group from under his shadowy hat.

“Where are you going?” the rider inquired.

“We’re just hiking in to camp,” the hikers replied.

“Hiking is a vile word,” the rider returned. “You are going right past one the finest views in the Sierra. Now stop and look at it.”

It was the summer of 1908, and the young Sierra Club members heeded his command. For they knew the thin, dark rider was John Muir, famed mountaineer and co-founder of the Sierra Club.

“You know,” Muir said, “when the pilgrims were going from England to the Holy Land, the French would ask them ‘Where are you going?’ They did not speak French very well, but they would say ‘Santa Terre’ (Holy Land). That is where we get our word ‘saunter.’ And you should saunter through the Sierra, because this is a holy land, if ever there was one.”

When John Muir preached this parable of wilderness-appreciation in 1908, he left an indelible mark in the mind of C. Nelson Hackett, who recalled the encounter in a 1972 oral history interview. Hackett was born in the City of Napa in 1888. He joined the Sierra Club during high school and later earned degrees from the University of California, Berkeley and Harvard Law School. After a stint in the U.S. Army, Hackett worked at the Bank of California (now MUFG Union Bank) where he became vice president and headed its trust department. When interviewed at eighty-three years old, Hackett recalled, “I don’t know of anything in my life that has been more delightful than those Sierra Club outings.” In 1908, during Hackett’s outing, Sierra Club membership had just reached 1000. Today, with three million members and supporters, Sierra Club is the largest and most influential grassroots environmental organization in the United States.

If you want to donate to this important project , please contact oral history interviewer Roger Eardley-Pryor at rogerep@berkeley.edu.