We are pleased to welcome Roger Eardley-Pryor to the Oral History Center. Roger joins our team as an Historian/Interviewer.

We wanted to get to know him better, so we gave him our Q&A treatment. For more, follow him on Twitter @Roger_E_P. 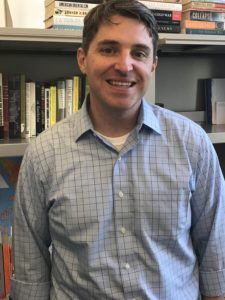 Q: When did you first encounter oral history?

I first encountered oral history in the Spring of 2011 at the Science History Institute (formerly Chemical Heritage Foundation) when doing archival research there as a graduate student. Rows and rows of hard-bound transcripts from their oral histories with leading chemists lined the shelves of their library in Philadelphia’s historic Old City. At that time, I focused on the dusty boxes pulled from their traditional archives. But those oral history interviews sparked my curiosity. Years later, after completing my PhD at the University of California Santa Barbara, I accepted a post-doctoral fellowship in the Science History Institute’s Center for Oral History. I conducted oral histories for their collection that, I hope, spark the interests of future researchers there.

Q: How did you use oral history in your graduate work?

While writing my dissertation, I drew from oral history interviews conducted by the United Nations Intellectual History Project (UNIHP) based out of the Ralph Bunche Institute for International Studies at CUNY. My dissertation analyzed the “global environmental moment” created by the 1972 United Nations Conference on the Human Environment, held in Stockholm, Sweden. The clashes between ecological scientists, international diplomats, and environmental activists in that moment laid the foundations for what later became sustainable development. But those clashes also entrenched the political patterns that still hamstring today’s efforts to solve global environmental challenges like climate change. The seventy-nine oral history interviews from the UNIHP offered first-hand accounts from UN diplomats, some who attended the Stockholm Conference and others who later defined the concept of sustainable development.

Q: Which interviewers have been your biggest influences, either in or out of oral history?

I love Terry Gross’s interviews on NPR’s Fresh Air. Even before I lived in Philadelphia, where Terry Gross lives, I’ve considered her an American treasure! In addition to solid research before her interviews, she has a knack for personal rapport with her narrator and her listeners. She goes beyond the particulars of past events and encourages narrators to share their feelings about those events, often in light of the narrator’s earlier family experiences. She, her narrators, and her listeners all seem to enjoy and learn something new from her interviews.

Q: What projects are you most excited to work on at the OHC?

I’m super excited to work on a renewed Sierra Club project at the OHC! I’m also co-developing with Shanna Farrell an oral history project about the intersecting communities surrounding EPA Superfund sites. And I’m keen to work with Paul Burnett on a project exploring Gender and Diversity in Silicon Valley.

Q: What is your dream oral history project?

An oral history project commemorating the first Earth Day would be dreamy! Earth Day was a nation-wide environmental teach-in held on April 22, 1970, which celebrates its 50th anniversary in 2020. Part protest and part celebration, Earth Day 1970 saw an estimated 20 million Americans at roughly 1500 colleges and 10,00 primary and secondary schools across the country organize their own particular Earth Day teach-ins and demonstrations. This unprecedented activity proved transformational for life-trajectories of many Earth Day participants and significantly effected legislative policies at local, state, and federal levels. In my wildest dreams, I imagine an Earth Day oral history project that reflects the original organization of Earth Day. I envision oral historians and institutions partnering to conduct interviews all across the nation but focused on the Earth Day stories and environmental legacies of their particular locations. I imagine high schools and colleges hosting 50th Anniversary Earth Day meet-ups for original participants to gather and record their own memories of Earth Day, which could be uploaded and digitally archived at a central organizing institution, perhaps through the Bancroft Library’s Oral History Center!  I imagine hosting more formal and polished “Oral History Live” events where project interviewers re-create/re-visit some of the most interesting stories from interviews on stage with their narrators, which would be live-streamed online. At these live events, narrators could share their perspective on Earth Day’s legacies, reflect on changes since, and address new or unresolved environmental issues that demand attention and action.