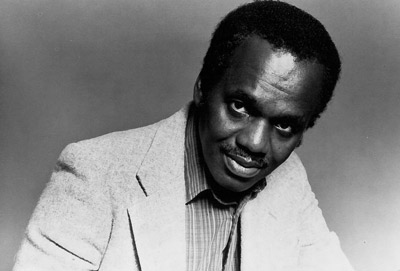 Today we commemorate the life of Gildo Mahones, an inspiring, talented, and powerful bop-based pianist who grew up in Harlem in the 1930s and 40s and played with virtually all the jazz greats during the 1950s and 60s. He passed away last week at the age of 88. His 2015 oral history addresses a plethora of issues surrounding jazz: his childhood in Harlem, the advent of bebop and its luminaries, jazz vocalism, racism, and more.

Mahones was born to Puerto Rican parents in the Spanish section of East Harlem in 1929. Later the family moved to an apartment behind the Apollo Theatre, and in the 1950s, he eventually performed with many of the jazz greats he heard there as a teenager, including Duke Ellington and Count Basie. In a Berkeleyside feature of Mahones, writer Andrew Gilbert describes how the pianist and the piano were not love at first sight; after an unsuccessful first lesson at age seven, it took his mother moving the neighbor’s left-behind piano into their home and a family friend doling out some live tunes on the piano for Mahones to finally warm up to the instrument.

After being hired to perform in 1949 at Minton’s Playhouse in Harlem and then briefly serving in the military, Mahones became the pianist for Lester Young’s band at Birdland. Here, he wrote dozens of songs. On composing, Mahones said in his interview, “Oh, the songs come to me in many ways. […] A dream could blossom into a song.” He goes on to describe Young’s unique style of playing and his friendship with Billie Holiday, whom he dubbed Lady Day and who called Young ‘Prez’.

In 1965, Mahones moved to Los Angeles to work with Joe Williams and Harry “Sweets” Edison at the Pied Piper club, also working with vocalists O.C. Smith, Lou Rawls, James Moody, Big Joe Turner, and Lorez Alexandria, with whom he recorded several albums. Throughout the 1970s, he was a popular sideman in clubs across Southern California, and toured Japan and Europe with Benny Carter and with his own band. Mahones has several recordings published with a Japanese company, which unfortunately have not been released in the US. Later on, he and Mary, his wife of 45 years, moved to Oakland so as to be near their daughter and grandson. He practiced often and performed at clubs and galleries around the Bay Area.

You can hear more of Mahones’ reflections in this video excerpt from his oral history.