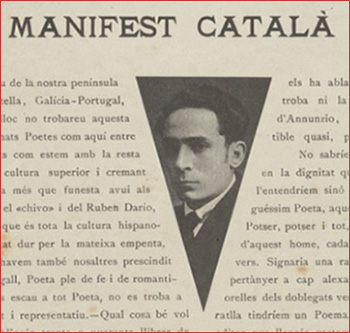 From the early 20th century until the outbreak of the Spanish Civil War, Spain witnessed a flourishing of literary and artistic forms (painting, poetry, prose and film) on par with the experimentialism taking place across Europe and Latin America. According to Jennifer Duprey in Avant-Garde Cultural Practices in Spain (1914-1936), self-taught poet and radical journalist Joan Salvat-Papasseit found inspiration in both the formalist attributes articulated in F.T. Marinetti’s Manifesto del futurismo (1909) and in the social terms of compatriot Gabriel Alomar’s El futurisme (1905). “He was the only Catalan writer that had the conscience of the revolutionary character that the Futurist movement had from a social point of view, yet sustained that his particular point of view was a dialectical concept of tradition,” explains Duprey. 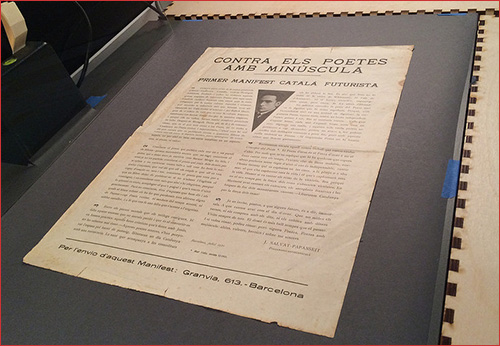 Last fall the UC Berkeley Library became one of three libraries outside of Spain to own an original broadside of Contra els poetes amb minúscula: primer manifest català futurista (Against lowercase poets: the first Futurist manifesto) published in 1920 and is now the first institution in the world to have digitized it. Salvat-Papasseit’s famous collection of poems L’irradiador del port, i les gavines (1921), now housed in The Bancroft Library, was featured in the exhibition No Legacy || Literatura Electrónica installed in Doe Library’s Brown Gallery last year. 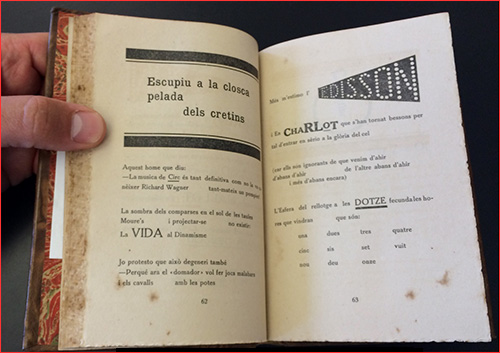