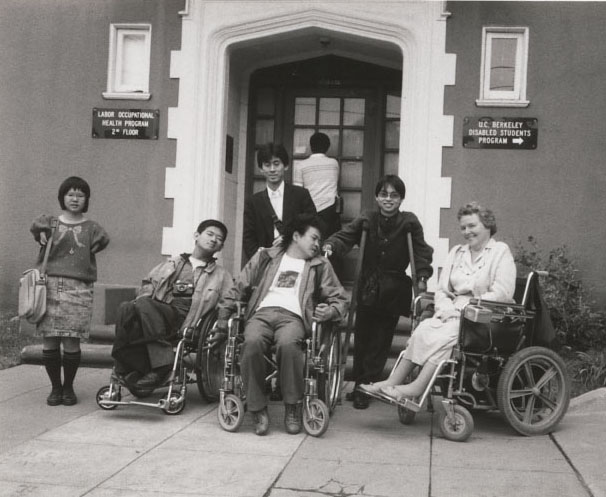 Susan O’Hara, our former colleague at OHC (back in ROHO days) and the prime mover in Bancroft’s acclaimed Disability Rights and Independent Living Movement (DRILM) project, passed away on July 1. We will remember her for her many fine personal qualities, among them a wonderful sense of humor, a gift for friendship, quiet yet strong leadership skills, and a keen historical sensibility.  All of these came into play in bringing DRILM into being.

Susan was a 1971 participant in a groundbreaking experiment at Berkeley. A decade earlier UC Berkeley had opened a floor in the campus hospital to house students with significant physical disabilities, most of them then confined to nursing homes or to their parents’ care with little hope of accessing higher education.  Attending Cal at a time of free speech and anti-war movements, the students found their voices, reveled in the zeitgeist of the sixties and the freedom of motorized wheelchairs, and became politically active. Over the next decade they founded on campus one of the first programs for students with disabilities in the nation. They next turned their attention to the broader community, founding the Center for Independent Living, which became the model for similar organizations across the nation.   A host of spin-off organizations for people with disabilities grew out of CIL; many of the primary leaders of the battle for the Americans with Disabilities Act and other campaigns for disability rights and independent living came out of these initiatives. In 1975, Susan was hired as Berkeley’s coordinator of the residence program for students with disabilities, assisting students in the transition to independent living as the campus made residence halls accessible and closed down the Cowell Hospital unit.

In 1982 Susan approached Willa Baum, ROHO’s director, and made a compelling case that something of great historical moment had happened and was continuing to happen on campus and beyond. “This has got to be documented,” she urged.  Willa immediately agreed and the long struggle to find funding for an oral history project ensued. It was difficult going. Susan and Willa’s understanding was ahead of their times; the Society for Disability Studies was just then coming into being, as a section of the Western Social Studies Association; the Disability History Association was far in the future. The Americans with Disabilities Act did not pass until 1990. Only a very few historians or social scientists recognized disability studies as a fruitful field of study and there were apparently no oral history projects underway. The NEH turned down the ROHO grant application three times, and we did no better with other grantors, although Willa was able to find a modest sum from Cal’s Prytanean alumnae to fund two pilot interviews.

Susan did not give up. By the mid-1990s, the time was right. Susan was alerted to a new program at the National Institute on Disability and Rehabilitation Research in the Department of Education that might be interested in our project.  Susan and Mary Lou Breslin, another disability advocate with a strong sense of history, joined with ROHO to convince Bancroft Library curators of the project’s value. Their meeting resulted in a successful 3-year grant for an oral history program focusing on California leaders and behind-the-scenes activists, and including an additional component for Bancroft to acquire, preserve, and make accessible personal papers and records of activists and their organizations.  Four years later, with a second NIDRR grant, the project moved nationwide, recording interviews and collecting historical papers of leaders of the movement in Massachusetts, New York, Washington DC, Texas, and other centers of activity.

Susan played a key role at every step as the project got underway. I was the project manager/coordinator  for ROHO so I know better than most how important she was. Under the guise of her position as “historical consultant,” she advised on every aspect of the project. She helped us realize how important it would be to staff the project with interviewers from the disability community, who would have the trust of interviewees and organizational leaders whose memories and papers we were to collect. This trust was essential to study a movement with the watchwords “Nothing about us without us.”  With her help, we hired an outstanding group of interviewers whose personal experiences, historical studies, and training in oral history methodology made them ideally suited to the project. Susan helped us navigate the difficult task of selecting interviewees, some of them recognized leaders and founders of organizations, some of them less well-known builders and sustainers of the movement or well-placed observers of key events.

Susan was a skilled interviewer; she conducted fourteen invaluable oral histories for the project. She was also a graceful writer and keen editor, who had a hand in all the project grant-writing, publicity, and website materials.  Her lasting legacy in all these areas can be found on the project website at http://bancroft.berkeley.edu/collections/drilm/index.html. You will also find there a record of Susan’s many other contributions to the disability movement in her own oral history, Susan O’Hara, Director of UC Berkeley’s Disabled Students’ Program, 1988-1992; Coordinator of Residence Program for Disabled Students, 1975-1988.