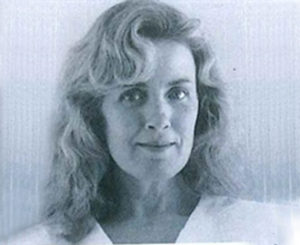 Judith K. Dunning, an oral historian whose mission was to document the undocumented, passed away on September 25, 2016, after a long illness. Judith came to the Regional Oral History Office in 1982 with the idea for an ambitious oral history project. While taking a documentary photography class where she concentrated on the Richmond waterfront, she had begun to hear stories about Richmond’s quiet prewar life, organized around its port, the Ford factory, and the Chevron refinery, and its remarkable transformation with the coming of the Kaiser shipyards in World War II. She envisioned a project to document this history, drawing on her experience recording interviews with textile mill workers in Lowell, Massachusetts, and shipyard workers at the Charlestown Navy Yard for the National Park Service.

Judith was interested in recording the stories of people who do not leave written records, who remain undocumented in traditional historical archives and publications. Launching and carrying out her project required difficult fundraising and substantial community outreach. She immersed herself in the community, meeting both longtime residents from the prewar years and migrants from the South and Midwest who came to work in the shipyards. She slowly built connections and found her interviewees from many walks of life: fishermen, ferry operators, cannery workers, welders, sheet metal workers, painters, and iron workers.

To read Judith’s interviews is to immediately realize the deep humanity and respect for her narrators that she brought to her work. She listens. She encourages a deeper story with careful prompts and obvious interest in the details of their lives and work. She respects their opinions and memories of how things were. Sometimes she takes a narrator to the site of a former workplace. She goes fishing with the Ghio brothers and whale watching with the one of the last whalers to work out of San Francisco Bay. Over time, she observes a transformation in how her interviewees view their relationship to history. She notes in the project preface that many at first asked “What is important about my life?” but soon they became actively involved in research, collecting photographs, and recommending others to be interviewed. She comments, “‘On the Waterfront: An Oral History of Richmond, California’ became their project, with a life of its own.” One of her interviewees was buried with a copy of his oral history on his chest.

The historical enterprise did not end for Judith with the publication of the oral history transcripts. She envisioned a larger role in the community for these stories. She wrote “Boomtown,” a play based on the oral histories, which depicted Richmond’s transformation, retaining the language and flavor of the interviews. “Boomtown” was produced by Tale Spinners Theater and toured Bay Area senior centers, schools, and museums in 1989. An accomplished photographer herself, she collected photographs and artifacts from her interviewees, creating exhibits featuring text from the oral histories for numerous community events in the Bay Area throughout the 1980s. One of her most innovative ideas was to draw on the oral histories to create books for adult literacy programs. With funding from the US Department of Education, she selected text from the Richmond project oral histories and fashioned narratives of interest to adult literacy students in Richmond’s Literacy for Every Adult program. The next step was to interview some of the literacy students themselves and let them assist in creating books from their own narratives. The process was transformative for the student-interviewees, while offering material that spoke to their fellow adult learners.

Judith’s work in the Richmond community helped build widespread interest in the complex history of this waterfront city before, during, and after World War II. When the National Park Service sought a site for a national historic park to showcase the home front during the war, the city of Richmond was the final choice. And the Regional Oral History Office, now the Oral History Center of the Bancroft Library, became the logical home for a multiyear project, sponsored by the Park Service, that has produced more than 250 interviews, in the “Rosie the Riveter World War II American Home Front” series. In 2001, Judith returned to the office after several years’ respite, conducting some of the Rosie interviews as well as oral histories with California dairymen and others.

In preparing this remembrance of Judith, I revisited her interviews and her interview histories. Once again, I was struck by her strong connection to her narrators, her genuine humanity, and her wonderful appreciation of life and the humor of our existence. I offer this quote from her interview history for “The Ghio Brothers: Fishermen by Trade” as a prime example of all these qualities, as well as of the lasting impact of her work:

I had told the Ghio family over the phone that I tape one person at a time, preferably in a quiet location. We agreed that Dominic Ghio would be the first narrator. On the day of the interview I rang the doorbell and sister Louise Montalbano answered looking at me with a mixture of caution and curiosity. She summoned brothers Tony and Dominic Ghio, who were on the porch repairing fishing nets. Dominic and I sat at the dining room table. My suggestion to interview him alone was not even considered. Older brother Tony and sister Louise took what was to become their regular stance at our weekly meetings. They stood directly over us. What I had not realized was that they were in a relay position. When I asked Dominic a question, Tony and Louise would dash off in separate directions to retrieve family items to illustrate the story. Sometimes Dominic would jump up from his chair to join in the search, dragging his microphone behind him. During the course of the interviewing I had seen family portraits in ornate frames, crab nets from the 1920s, a charco-stove from their Monterey fishing boat, the Natale, and hand-carved weaving tools…

On summer mornings at Point San Pablo Yacht Harbor, I joined the Ghio brothers on shrimping trips to China Camp, always bringing a camera and my sea legs. It was an opportunity to experience the beloved Natale first-hand and to see Tony and Dominic in action. I realized that the Ghios’ story needed to be presented visually with a strong hands-on element if people were going to get a glimpse into the occupation of a fisherman. I called Kathleen Rupley, curator of the Richmond Museum, and it was the beginning of a collaboration between the Museum staff, an oral historian, and the Ghio family. The result of our work was an exhibition, “Fishermen By Trade: On San Francisco Bay With the Ghio Brothers,” which ran at the Richmond Museum for six months in 1988…During the course of the oral history project and the fishing exhibition the Ghio brothers became local celebrities. They were invited to demonstrate traditional net weaving at the Richmond Museum; Richmond’s Festival by the Bay; Oakland Seafest; and the San Francisco Craft and Folk Art Museum. They are among the last of the San Francisco Bay fishermen who still practice this craft…I developed a real affection towards the Ghio family and was caught off guard when Tony Ghio died suddenly last year. A consoling factor is that Tony did something he loved for his entire life. The brothers never stopped fishing. At the end of the interviewing sessions, when I asked them what they like to do in their spare time, without a moment’s hesitation, they said, “We like to go fishing.”

Judith is survived by her son, Michael Dunning Liebman, and her four brothers and sisters and their spouses, children, and grandchildren. Her beloved husband, James Andrew Liebman, died in 2010. A Celebration of Life for Judith will be held on October 30, 2016, from 11 am to 3 pm, at Saint Mary’s College of California in Moraga.