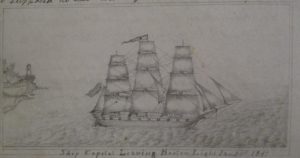 Background: Each year the Bancroft Library acquires a sizeable amount of new manuscript material. The sheer quantity of this material necessitates that the archivists who handle, process, and catalog these materials, exercise considerable judgment in balancing thorough and accurate descriptions that facilitate access with the need to make the materials available as quickly as possible. Archivists are trained to determine just the right level of description to allow for sufficient discovery. In the case of very large collections, an archivist rarely describes materials at the item-level.

But sometimes a single item merits closer examination and considerable research to  render it truly accessible to the library’s researchers. One such item recently caught my attention–

The “Ship Capitol’s Log Book” is the account of a passenger aboard one of the first ships to head to California during the gold rush, arriving in San Francisco in July 1849.

At first glance, it looked like a typical gold rush era journal, with daily entries describing conditions and life aboard the ship as it made its way from Boston to San Francisco around Cape Horn. But this one stood out because it included several finely rendered pencil drawings throughout including ships, shorelines, and even an albatross at rest.

Unlike similar journals that have crossed my desk, this one came with a contemporary inscription inside the front cover identifying the ship and giving the date (and, incidentally, providing a neat title for the catalog record). The accompanying description provided by the vendor was also intriguing, noting that there was an additional inscription in a different hand: “Above this [title] is the inscription of Paul Maraspin, another passenger on the ship and the ancestor of the log’s most recent owner…. It is not clear who authored the journal.” However, upon closer examination, I determined that this might not be the case. It was clearly two initials followed by “Maraspin” but it didn’t look like either a “P” or “Paul.” I could not clearly make out the first initial, but the second one looked like an “L,” and below that a street address of “17 Court Street, Boston” and the date “Feb. 1917.” 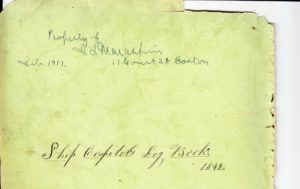 The vendor also noted that the lettering of the captions of the drawings was in a third hand, suggesting that someone other than the author of the journal might be the source of those. Also noted was the composer of several songs recorded in the journal, B.F. Whittemore.

The clues from the vendor and my own initial assessment of the journal suggested that a bit more research might make the journal infinitely more discoverable and useful. I became intrigued by the name of the owner of the journal, and the information suggested by the vendor just didn’t seem to fit with the facts the artifact was presenting to me.

Archivists have at their disposal the same research tools many other people do…the internet and access to genealogical sites that hold various records. There is a tremendous amount of information out there that makes this kind of research much more efficient than it used to be. Of course, too much information can also be problematic and it is the skillful researcher who can quickly sort through large amounts information and surmise whether more research will yield tangible results or, lacking that, have to call the effort “good enough.”

In this particular case, I discovered information about the owner’s signature that led to the solution of numerous puzzles presented by the journal itself, including how he came into possession of it, its likely author, the identity of the illustrator, the history of the lyricist of several songs, the author of the final song in the journal, and the history of the ship and its captain, Thorndike Procter.

Because Maraspin struck me as an unusual name, my first step was a Google search on the name. This resulted in the discovery of a Maraspin Creek in Barnstable, Massachusetts. Assuming the creek was named after a prominent family in the area, the information gave me hope that I could find out more about them and explore those connections.

I switched over to Ancestry.com to do a direct search on Paul Maraspin from Barnstable, Massachusetts around the time period of 1849. Numerous records surfaced that indicated a Paul Maraspin from Barnstable had been married and had several daughters, but none of whose initials matched the inscription in the journal. But then I found an application to the Sons of the American Revolution from 1937 for Paul Maraspin that listed his wife, Mary Eliza Davis, and one child, a son, Francis Lothrop Maraspin. Paul Maraspin had this son rather late in life, at the age of 52, and some 16 years after he had sailed to California. Looking back at the inscription, I could see now that the autograph was, in fact, “F.L. Maraspin.”

And from the journal again:

As you can see, the signature and address matched the inscription on the journal cover perfectly and we now knew we had our owner and could assume, with reasonable certainty, that the likely author of the journal was Francis Lothrop’s father, Paul Maraspin.

I shared these initial findings with my supervisor, Randal Brandt, who directed me to a publication that would be key to figuring out the rest of the puzzles. The Argonauts of California, published by C.W. Haskins in 1890, is an invaluable source of information about the gold seekers who came to California. The passenger lists it contains were crucial in figuring out the names of people associated with the journal. We now knew who had written the journal but who had done the drawings? And what about the composer of those numerous songs recorded in the journal? A closer examination of the drawings proved fruitful. Of the nine drawings, two of them had the initials “CCH” in the lower right hand corner. 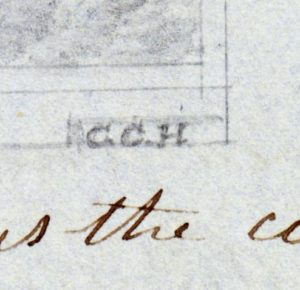 A quick perusal of the Capitol’s passenger list turned up only one possible match, a C.C. Hosmer. Now we knew the name of the illustrator. Back to Ancestry.com again, I went hunting for more information about him and found out his full name, Chester Cooley Hosmer (1823-1879). Because Chester Cooley Hosmer is also an unusual name, on a whim I Googled it along with the word “Capitol.” The very first result was a library catalog listing in the Special Collections of the Jones Library in Amherst, Massachusetts for Chester Cooley Hosmer’s journal documenting the same trip aboard the Capitol. Describing it as a journal “illustrated throughout with his drawings,” the catalog listing included scans of two pages with drawings. Here is one of them. 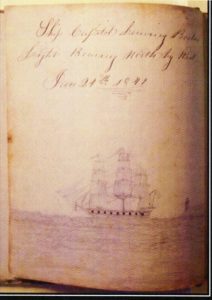 One can readily see the style of these drawings match those in the Maraspin journal. Not only did we now know our illustrator but also the location of his journal from the very same voyage.

Turning to the name listed as the songwriter, B.F. Whittemore (sometimes spelled incorrectly as “Whitmore” in passenger lists), a search turned up another interesting character. The Wikipedia entry for Benjamin Franklin Whittemore states that he went on to become a minister in the Union Army and then elected to the state legislature of South Carolina and eventually the House of Representatives.

Others identified in this process included the composer of the final song lyrics in the journal titled, “A Song Dedicated to the Officers of the Ship Capitol,” and signed “W.T. old friend.” Again, the passenger lists were the key as only one person had those initials, W.T. Hubbard.

More research on the ship and lists revealed the full name of the captain, Thorndike Procter of Salem, Massachusetts.

As might be true with any group of persons traveling so far from home for so long, there is inevitable tragedy as well as triumph. Captain Thorndike Procter committed suicide in San Francisco Bay on October 17, 1849. It was reported in the papers that the captain “had been lately subject to occasional fits of derangement, during the last of which he jumped overboard, and was drowned….”  Nine weeks later, Paul Maraspin’s young “old friend,” William.T. Hubbard, just 23 years of age, also died by drowning in San Francisco Bay on Christmas Eve.

The work of improving access and discoverability to our collections is at the heart of what we do as library professionals. Unknown people become known, their stories and lives become real to us, and as you read this journal now you can see the intertwining of their lives. One hundred and sixty-eight years later, two journals from the same trip are virtually reunited because of the work of archivists and catalogers separated by time and a continent. In this way, library professionals contribute to a very large cultural jigsaw puzzle that, slowly but surely, becomes ever more complete.

To see the completed catalog record for this item please use this link: 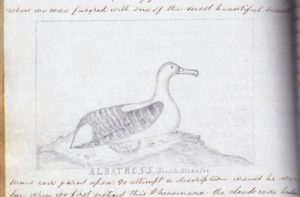