Why an escape room?

Covid-19 altered the lives of people across the world. For the UC Berkeley campus, the virus forced the university to close its doors to students in March of 2020 and almost all of its services went virtual overnight. Today, things on campus are returning to a new normal and students have eagerly returned to campus with instruction shifted to mostly in person. With the start of the new academic year, the Earth Sciences & Map Library staff wanted to welcome back students and remind them of our available library services and spaces. This year was the first time that nearly all of the incoming freshman and sophomore students would be on campus for the first time so the orientation needed to be extra special. Staff decided that one of the best ways to reach out was by creating a virtual library escape room. To incentivize student participation, a gift card drawing was added for contestants. In order to foster a connection between the physical library and students, the escape room used photographs of different locations in the Earth Sciences & Map Library for its background images.

After a few meetings and discussions, the Earth Sciences & Map Library staff decided that they wanted the escape room to be focused on introducing undergraduate students to the library. Questions were geared towards undergraduates and they were the only contenders entered into the gift card drawing. However, in order to encourage camaraderie with departments in the same building housing the Earth Sciences & Map Library (McCone Hall), graduate students, faculty, and staff were encouraged to participate in the escape room’s simultaneous Battle of McCone competition. The friendly battle involved the two majors located in the McCone Hall building, Earth and Planetary Sciences and Geography. Whichever major had the highest number of players would be dubbed the winner of McCone Hall and receive all bragging rights.

The majority of undergraduate students are Generation Z and library staff wanted to pick a theme for the escape room that would be popular with this generation. They decided on using for their theme the show Stranger Things which is very popular with Gen Z. The script for the escape room started off with the story that the Earth Sciences & Map Library contained a portal to a horrible parallel dimension called the Upside Down Library. In the scenario, students accidentally entered the portal to the Upside Down Library and the only way to escape back to the Earth Sciences & Map Library was to solve all clues in all rooms.

The escape room actually consisted of three separate virtual rooms each containing two clues. The two clues could be found by clicking on an image in the virtual escape room which would then direct the students to a page on the Google Site detailing the clue. In total, students had to enter 6 clues in order to “escape” and make it safely back to the Earth Sciences & Map Library. Each of the clues were based on a resource available either through the greater UC Berkeley Library or at the Earth Sciences & Map Library. The whole escape room was created with a mix of Google products: Google Slides, Sites, and Forms. Google Sites served as the home base and structure for the escape room. Google Slides were used to create different “rooms.” The Students entered answers for the clues in the Google Form.

In order to increase accessibility the font for all text was set at 14 points Arial. Images were checked with the Google Chrome extension Colorblindly for issues that could be encountered by the visually impaired. Each image had ALT text added and content was structured with appropriate headers.

At the conclusion of the escape room, three students were randomly selected as winners for the gift card drawing. In addition, winning students received a library tote bag. On the same day winners were notified of their gift card, all participants were sent an email survey to gauge their experience with the escape room.

Reading about something is never the same as a hands-on experience. Now that you have read all about our virtual escape room try it out for yourself!

While this library escape room was geared towards specific majors, the images and questions can be easily altered in order to create other escape room variations. If you have questions/comments about the escape room created by the Earth Sciences & Map Library please email erican@berkeley.edu.

Other virtual escape rooms to motivate you:

At the Earth Sciences and Map Library staff, students, and faculty have access to fantastic mapping resources. The library has resources for topographic maps, geologic maps, historical maps, sanborn & other fire insurance maps, nautical maps, and GIS data. Out of all the resources, one of the most fun to use is ArcGIS StoryMaps. To access StoryMaps with your CalNet ID, you want to access it through your institutional account. Go to http://cal.maps.arcgis.com and click on the link to login using your UC Berkeley Calnet account. If you do not have a CalNet ID you can access StoryMaps with an ArcGIS Public Account. 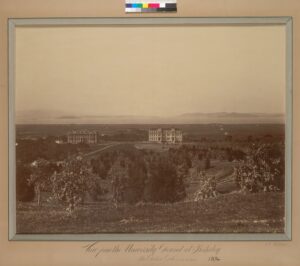 This November, the Earth Sciences and Map Library created an exhibit using StoryMaps titled First 50+ years of the Campus & City. StoryMaps allows you to do just as the title tells you, create stories with maps. You can add maps, text, images, and multimedia to tell your unique narrative. Staff of the Earth Sciences and Map Library were able to create an interactive story that showed how the campus and city changed over time from the founding of the UC Berkeley campus in 1868 to 1920 when the city and campus had greatly expanded over 50+ years.

One of the most powerful components of StoryMaps is its interface that allows the creator to make an exhibit that is highly interactive. In the exhibit for the Earth Sciences and Map Library, there is an app called swipe which allows a creator to place two maps side by side which users can then swipe left to right to compare the maps. This tool was added to the exhibit for the Earth Sciences and Map Library using two maps of the UC Berkeley campus from 1901 and 1911. Users are able to swipe left and right to see the differences between the two maps that show the changes campus underwent in a ten year span. The ability to have these types of interactive and comparative maps allows users to learn visually the differences and similarities between 2 maps. 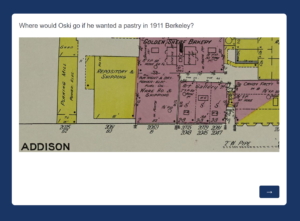 StoryMaps also has the capability to insert embedded code. This allowed the exhibit to have Qualtrics embedded. In the exhibit from the Earth Sciences and Map Library, Qualtrics was embedded and created to be a game that asks users to click on a map to answer related questions to old buildings. With the embedded Qualtrics the exhibit incorporated play into its story to engage users and added a bit of fun to its narrative. One thing to note when embedding code in StoryMaps is to double check that you have inserted the correct code. When creating the exhibit the Earth Sciences and Map Library staff learned the hard way that when code is entered incorrectly, it will cause StoryMaps to crash.

Another important feature of StoryMaps is creating groups on ArcGIS Online. This feature helped immensely when creating an exhibit for the Earth Sciences and Map Library. By having StoryMaps added to the group, all staff members of the library were able to edit the exhibit. This group sharing ability allows for large groups to easily collaborate virtually.

After our own positive experience creating an exhibit using StoryMaps for the Earth Sciences and Map Library, we highly recommend using it if you want to create an interactive experience for users by telling a story with maps. StoryMaps would be great for an exhibit, project, or presentation whether that be for an academic class, a professional presentation, or a library. There are so many features and tools with StoryMaps you can use to bring your maps to life!

All upcoming programs for the Free Speech Movement Café Programs will be posted here.