Skip to content
The Library has added more than 1,600 new ebooks to its collection in OpenEdition. Since 2014, we’ve been supporting this initiative based at the Université d’Aix-Marseille to open scholarly content from Europe and France in particular to the world. The Fremium program allows the UC Berkeley community to participate in an acquisitions policy that both supports sustainable development of open access (OA) and that respects the needs of teaching, research and learning communities. With our participation, Berkeley researchers and students benefit from greater functionality while making it possible for anyone in the world to view in html and in open access 70% of the ebook catalog of nearly 12,000 titles.

Firenze University Press is at the forefront for open access (OA) publishing in Italy. By opening up access to more than 1,300 academic books and 50 peer-reviewed journals over the past decade, it has helped its research community to achieve wide and rapid dissemination, increasing exponentially the impact of their research. Today, all Firenze University Press content and metadata are published open access and are discoverable through the tools of transformational infrastructure organizations such as DOAB, DOAJ, and OAPEN.

Besides UC Library Search, many of the press’ publications, along with other Italian OA publishers, are also available through Casalini Libri’s online platform Torrossa.

Mairi McLaughlin is Associate Professor of French and an Affiliated Member of the Linguistics Department and the Department of Italian Studies. She specializes in French/Romance Linguistics and Translation Studies. Her most recent publication presents the results of the first major study into the history of language in the French press. It has a dual aim: to shed light on the history of the genre of journalism and to explore what the study of historical periodicals can bring to our understanding of the history of language.

From its beginnings on the artistic fringe during the Hispanic Civil Rights Movement to its current status as the oldest and most accomplished publisher of contemporary and recovered literature by US Hispanic authors, Arte Público Press and its imprint, Piñata Books, have become a showcase for Hispanic literary creativity, arts and culture.

The original publishers of Sandra Cisneros’ seminal The House on Mango Street, Arte Público’s other well-known authors include Obie-award-winning playwright and filmmaker Luis Valdez, playwright Miguel Piñero and best-selling authors Nicholasa Mohr, Victor Villaseñor, and Helena María Viramontes. As part of the ongoing efforts to bring Hispanic literature to mainstream audiences, Arte Público Press launched the Recovering the US Hispanic Literary Heritage Program in 1992. This program represents the first nationally coordinated attempt to recover, index and publish lost Latino writings that date from the American colonial period through 1960. [from the publisher’s web site].

From children’s books and contemporary fiction to critical social history, the UC Berkeley Library is proud to hold most of Arte Púbico Press’ bilingual catalog of publications in the Main (Gardner) Stacks, the Ethnic Studies Library, and The Bancroft Library. In recent years, the Library has also acquired many of its publications in digital form through Digitalia Hispánica, Latino Literature, and other ebook platforms such as OverDrive. These can be discovered in UC Library Search with keyword phrase “arte publico press” and limiting to online through UC Berkeley.

Senegalese in the Diaspora: What Sociolinguistic Interviews Can Tell Us about Language, Race, Mobility, and Belonging
Maya Smith, University of Washington

Drawing on extensive interviews with people of Senegalese heritage in Paris, Rome, and New York City, this talk explores the fascinating role of language in national, transnational, postcolonial, racial, and migrant identities. Senegalese in the diaspora are notable in their capacity for movement and in their multifaceted approach to discourse, shaping their identity as they purposefully switch between languages. Through a mix of poignant, funny, reflexive, introspective, and witty stories, interviewees blur the lines between the utility and pleasure of language, allowing a more nuanced understanding of why and how Senegalese move.

This paper is part of a larger project about how colonial explorers, missionaries, and magistrates in what is now the Democratic Republic of Congo used strategies of “folklorization”—that is, the framing of oral traditional materials as quaint, rural, and authentic—as propaganda in the service of popularizing the colony and obscuring the everyday violence of the colonial state. It will focus on the archives of Léon Guébels, a prosecutor and judge who published many folklore collections under a pseudonym, contain manuscripts written by Congolese schoolchildren in both French and African languages, sent to him by their teachers, which he overwrites in large red letters with appreciations such as “IDIOTIC,” “NOT WITTY ENOUGH,” or “CLEARLY THE INVENTION OF A SILLY CHRISTIAN GIRL.” I will examine some of the reasons he finds these tales inconvenient, framing my findings in the context of colonial racial anxieties over subversive ideologies, urbanization, “detribalization,” and open rebellion.

It has been a challenging year and we look forward to most of you returning to campus where you can take advantage of all the resources the Library has to offer. By August 25, most of UC Berkeley’s libraries will have reopened. This year’s welcome back newsletter for those working in the Romance languages focuses on both digital and print resources. For the most up-to-date information on the UC Berkeley Library’s services, please continue to check the Library services and resources during COVID-19 page.

Beginning in 1936, a newly-formed German military mapping agency produced a large number of topographic map series covering all parts of Europe at various scales, as well as much of northern Africa and the Middle East.

This organization started out as a back room department of the German Army General Staff, focused on military contingency mapping. But, given the murderous goals of the Nazi regime, it quickly morphed into something else, a military mapping agency which provided planning tools for the Nazi leadership to wage a war of conquest, marked by atrocities and unspeakable crimes.

A presentation by Wolfgang Scharfe, a geography professor at the Free University of Berlin, at the International Cartographic Conference in Durban in 2003, sheds light on the history of these military map series published by the Directorate for War Maps and Surveying. Scharfe looked at one particular topographic map series covering Spain, published in 2 editions between 1940 and 1944, Spanien 1:50 000.

German military cartographers mapped Spain at different scales. The Nazis saw Spanish dictator Francisco Franco’s fascist regime as an ally, but Franco wisely remained neutral during World War II. Initially, the German military mapping  of Spain can be seen as part of an effort to bring the Franco dictatorship into the Second World War as a German ally. One goal was the capture of the important British base at Gibraltar, at the entrance to the Mediterranean Sea. 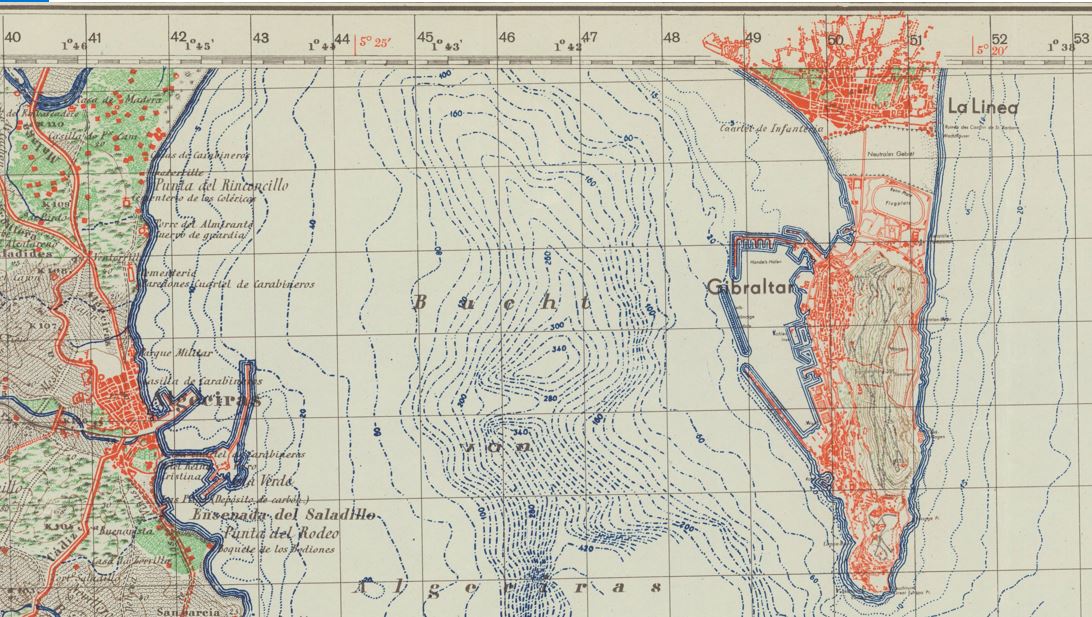 The Bay of Gibraltar, also known as Gibraltar Bay and Bay of Algeciras, identified on the German sheet La Linea-Gibraltar as Bucht von Algeciras. It is located at the southern end of the Iberian Peninsula, near where the Atlantic Ocean and the Mediterranean Sea meet. The sheet is overprinted with the Spanish Lambert Grid, obtained by German military cartographers in an undercover intelligence operation.

The Berkeley Library set of the German Army Map of Spain 1:50,000 consists of 901 sheet maps, accompanied by 3 index maps. It includes two editions of many topographic sheets which cover specific areas of Spain. First Special edition [= Sonderausgabe] sheets were issued between 1940 and 1944, while the second Sonderausgabe sheets were chiefly issued in 1941.

Scharfe explains that map specialists of the Army Planning Chamber [= Heeresplankammer], the Berlin-based production platform of the Directorate for War Maps and Surveying, copied the Spanish map data. The first edition of this map series (895 published sheets) only contained the Spanish map data. The maps show drainage, roads and trails, railways, vegetation, and other physical and cultural features.

Sheets of the second edition (612 sheets), however, were overprinted with the Spanish Lambert Grid, a geodetic grid which would allow German troops to use the maps to accurately rain down middle and long-range artillery fire on precise locations. 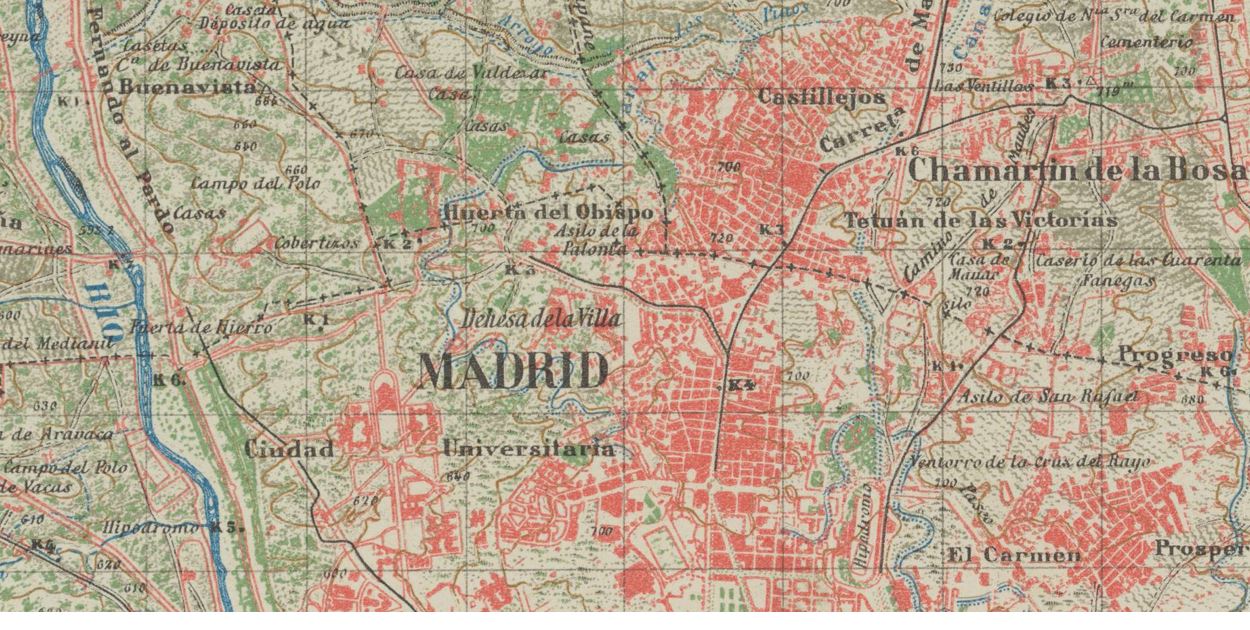 Detail from the Madrid sheet of the German military topographic map series Spanien 1:50 000, published by the Directorate for War Maps and Surveying, a military mapping agency administratively subordinated to the German Army General Staff.

The German military cartographers were able to acquire this secret Spanish military grid data for their own sheets, before that data even appeared on Spanish military maps. This was the result of a German undercover intelligence operation. German agents were able to draw on contacts established when the Nazis aided the fascist Franco dictatorship during the Spanish Civil War (1936-1939) by sending German troops to Spain, the so-called Legion Condor.

But the story does not end there: Scharfe relates that in 1943, irregular Spanish soldiers raided a German Army depot in Nazi-occupied southern France. They removed sheets of the German Army Map of Spain 1:50,000 with the secret Spanish military grid data. Spanish officials started an official inquiry which undoubtedly further undermined trust between the fascist Franco regime and the Nazis. Spanish diplomatic demands for explanations registered in Berlin proved unsuccessful.

This past spring, the UC Berkeley Library added 181 French ebooks to our existing collection from Franco-Belgian vendor Cairn.info. Though they aren’t yet discoverable in OskiCat or in the new UC Library Search unified catalog which launches on July 27, they can be read along with other ebooks and ejournals on the Cairn website.

Al Manar Éditions is an independent publishing house dedicated to the art and literatures of the Mediterranean with a notable focus on the Arab world. Established in 1996 within the Galerie Al Manar in Casablanca, directed by Alain and Christine Gorius from 1994 to 2003, the editorial house is now based in Neuilly-sur-Seine, France, and has published nearly 400 titles to date. Whether in translation or in original language, the majority of their books are in French. Well-known writers in their catalog from the global south include Vénus Khoury-Ghata, Adonis, Abdelkebir Khatibi, Mohammed Bennis, Abdellatif Laâbi, Mostafa Nissabouri, and Salah Stétié. From Europe and among others, there is Sylvie Germain, Jean-Pierre Millecam, Nicole de Pontcharra, as well as Kabila, a French painter of Andalusian Roma origin. Others include Syrian poets Aïcha Arnaout and Maram Al-Masri, Lebanese writers Etel Adnan, Georgia Makhlouf, Leïla Sebbar and Albert Bensoussan, who, by virtue of their family origins and their background, belong to both shores of the Mediterranean, like Anne Rothschild, an Ashkenazi poet and engraver who is often met in Tahar Bekri Ramallah—a Tunisian poet, or Özdemir Ince a—Turkish poet and man of letters as well as the Catalan translator and literary critic Jaume Pont.

Al Manar serves as a reputable vehicle of dissemination for the staggering diversity of thought and creative talent in the Mediterranean region. The UC Berkeley Library is proud to hold more than 40 of its imprints with several of the more precious artists’ books shelved in The Bancroft Library. The publishing house regularly exhibits at the Codex Book Fair and Symposium held biannually in Richmond and Berkeley.